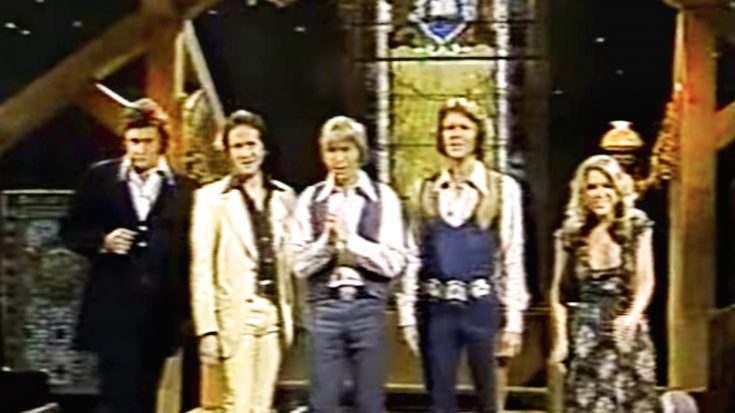 Known for his classic tunes like “Take Me Home, Country Roads” and “Rocky Mountain High,” John Denver made his way into the folk music industry in the 1960s & 70s – connecting him to several influential country music stars of the time. On March 22, 1977, ABC aired the John Denver special Thank God I’m A Country Boy which featured Denver along with a few very special friends.

Joining Denver for the evening were a handful of big-name stars. Johnny Cash lent his deep, echoing vocals to the gospel jam while Roger Miller and Glen Campbell’s voices rang out through the room. Mary Kay Place provided her soprano vocals to balance out the masculine tone of the song.

The legends chose to sing the gospel tune “I’ll Fly Away” by Albert E. Brumley. Written in 1929, it was published in 1932 in a collection known as Wonderful Message. The song touches on important topics such as eternal life, Heaven, and acceptance. A bluegrass standard, it has been performed by many others and often during funerals when the idea if a life everlasting is heavily referenced.

Together, the legends took the timeless tune and turned it into their own beautifully hopeful performance. You can watch them sing together in the video below.