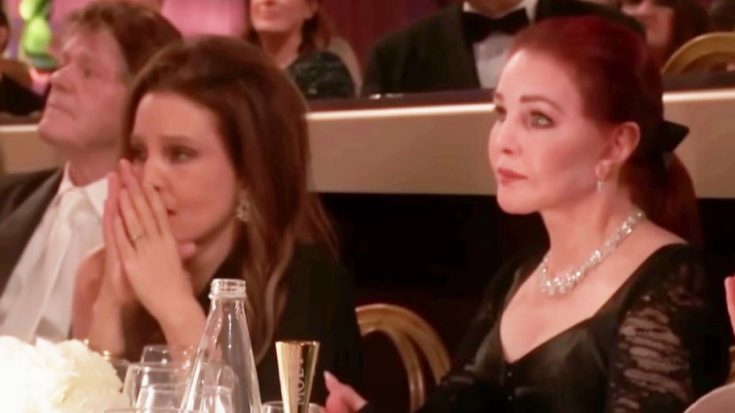 On Tuesday night (Jan. 10), the Golden Globes were held in Beverly Hills. The awards show was hosted by comedian Jerrod Carmichael and gave awards to the best TV and movies of the year.

One of the highlights of the show, in our opinion, was when Austin Butler took home the award for Best Actor in a Drama Motion Picture. He gave a riveting performance as Elvis Presley in the Baz Lurhmann film Elvis.

Butler was up against stiff competition. His fellow nominees were as follows:

After Butler was named the winner, he and Luhrmann embraced for a long while. He then gave a hug to his sister, who he brought as his date, and blew kisses to Lisa Marie Presley and Priscilla Presley. As he made his way up to the stage, he was given high fives and handshakes from Quentin Tarantino and Brad Pitt, whom he worked with on 2019’s Once Upon A Time…In Hollywood.

Once Butler got on stage, and all eyes were on him, he gave his speech.

“Oh, man, all my words are leaving me. I just am so grateful right now. I’m in this room full of my heroes. Brad Pitt, I love you. Quentin, I printed out the script of ‘Pulp Fiction’ when I was 12,” explaining just how big this honor really is to him.

Butler continued, “I owe this to a bold, visionary filmmaker who allowed me the experience to take risks and I always knew I would be supported. I love you, Baz Luhrmann. Thank you for believing in me in those moments that I didn’t even believe in myself. I’m so grateful to you. I also want to thank my dance partner, the greatest dance partner I could have ever hoped for, Mr. Tom Hanks.”

Butler also thanked Denzel Washington, his co-star in the 2018 Broadway play The Iceman Cometh, who recommended him to Luhrmann for the role. He thanks the producers before saying,

“And the Presley family. Thank you guys. Thank you for opening your hearts, your memories, your home to me. Lisa Marie, Priscilla, I love you forever.”

The cameras cut to Lisa Marie and her mother, who were both visibly emotional. The music was starting to play him off, and he joked, “You could at least play ‘Suspicious Minds’ or something.”

Butler finished up by thanking his sister Ashley, who was his date, his dad, who was watching at home, and his mother, who passed away when he was 23 (just like Elvis).

“Lastly, Elvis Presley himself, you are an icon and a rebel. I love you so much. Thank you. You are remembered and I will never forget thank you!” he said.

Obviously this honor meant so much to him, but it also meant a lot to Lisa Marie and Priscilla, who have spoken so highly of Butler and his performance, even saying he is the only person to have ever done Elvis justice. Both Presley women were tearing up with pride!