Lindsey Buckingham Claims Stevie Nicks Is Still In Love With Him 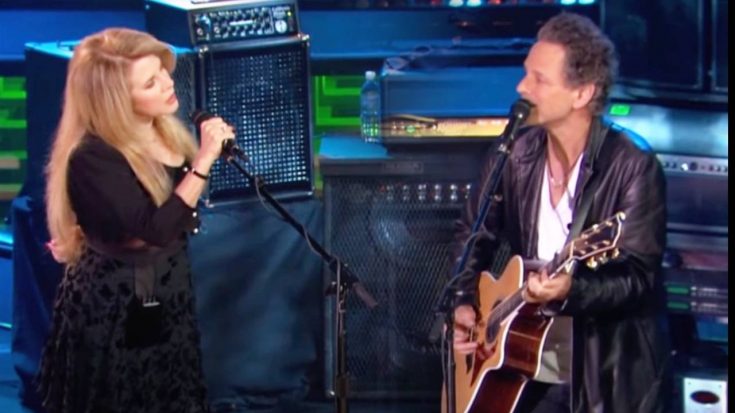 Legendary rock band Fleetwood Mac has been around since the late 1960s. In 1974, the band asked Lindsey Buckingham to join as lead guitarist and he agreed, but only if his bandmate and then-girlfriend Stevie Nicks could also join. The rest, they say, is history. A tumultuous history, if you recall.

In 1987, Buckingham and Nicks got into a “physical altercation,” according to Mick Fleetwood’s autobiography, and the guitarist left the band the very next morning.

Throughout the next few decades, both Buckingham and Nicks eventually reconciled with the band – and each other, that is, until Buckingham claimed they kicked him out in 2018. He claims he was fired from the legendary band in 2018 because Nicks gave the band an ultimatum that one of the two of them had to go. According to him, they chose Nicks over him.

According to Nicks, says that Buckingham’s claims are “factually inaccurate.”

In a new interview with UK’s The Times, Buckingham gives an idea of why Nicks would publicly disagree with him: she is still in love with him.

“There were a number of years where I wasn’t over her,” Buckingham said. “It is possible that she has never been completely over me either.”

He continued, “The way we had to get through Rumours is part of the legacy and heroics of the whole thing. We didn’t have time to heal or move on in the traditional sense. I think — and she was the one who moved away from me back then — that we both had to compartmentalize our feelings. That is not a healthy thing to do because those little compartments can remain sealed up for years, until things start seeping out when you don’t realize.”

Buckingham got married to Kristen Messner in 2000 and they had three children together, while Nicks never had any children. She did get married in 1983 to Kim Anderson, the widower of her close friend, but they divorced three years later and said they were never in love.

“I met the love of my life late and that gave me a whole other take on the world,” Buckingham told the U.K. publication. “Stevie did not have children. She went down a different route and has placed more importance on her professional life. How that played out in the last three, four, five years… It’s hard for me to know what her mentality is towards me, but I know what mine is to her because I’ve been married for 21 years and I have three children and it’s the best thing that ever happened to me.”

Their relationship, even decades after their break-up, continues to be a he-said-she-said ordeal. Watch one of their performances of “Landslide” together.