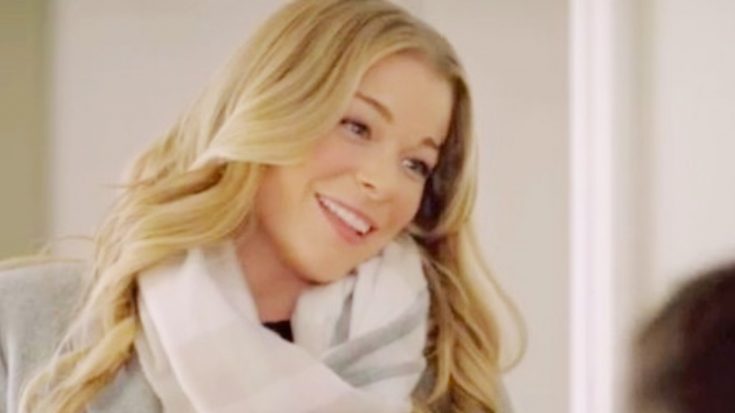 When LeAnn Rimes married her husband Eddie Cibrian in April 2011, she not only became a wife, but a stepmom. Eddie has two sons from his previous marriage, Mason and Jake, who were only seven and three when he married LeAnn.

Since then, fans of the couple have been able to watch the boys grow up before their eyes. As a frequent social media user, LeAnn often shares photos of the boys whenever they spend time together.

Throwback to Thanksgiving 3 years ago. Time flies! Looking forward to this year. Eddie and I (both only children) are entertaining the parents. The 6 of us are gonna tear it up ??

But those who haven’t seen pictures of Mason and Jake in a while may be stunned to see how grown up they are today. Now 15 and 11, the two little boys have grown into young men.

If you don’t keep up with LeAnn on social media you’re sure to be surprised when you see the latest picture she shared of the boys. The sweet snapshot was taken for their family Christmas card.

With LeAnn wearing a white dress and Eddie and the boys wearing white t-shirts and jeans, the family held up giant gold balloons that spelled out the word “love.” All four family members were beaming at the camera, and the happiness carried over into LeAnn’s caption.

“we are sending LovE and blessings to ALL!” she wrote.

With only one week til Christmas ? we are sending LovE and blessings to ALL! Happy Holidays from The Cibrian Family! #happyholidays #merrychristmas #withlove #LovE #family #christmascard #holidays2018 @minted

Just look at how big the boys are now! They look so much like Eddie, don’t they?

Anyone who knows LeAnn knows that she is a huge fan of the holiday season. She has released two full Christmas albums and one holiday EP.

Those records have contained her renditions of many beloved Christmas classics, including songs such as “Celebrate Me Home” and “Rockin’ Around the Christmas Tree.”

In addition to releasing her many holiday albums, LeAnn also embarks on Christmas tours and participates in many events celebrating the festive season. Because of this, she is known as one of the leading country voices of the Christmas season.

We wonder if LeAnn ever joins in singing with her stepsons during the holiday season? If so, we bet “Rockin’ Around the Christmas Tree” would be a joyful song for all of them to join in on. You can watch one of Rimes’ performances of the classic tune below.

We hope that LeAnn and her family have a happy holiday season!