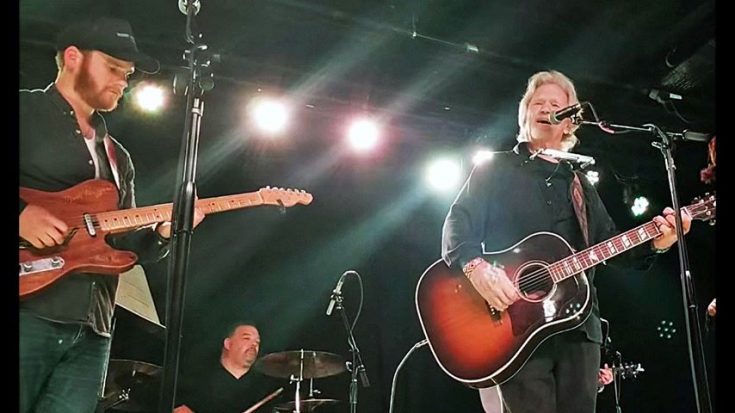 At 81, music icon Kris Kristofferson is still drawing crowds, singing with other music legends, and even sons of music legends. Not bad for any singer who’s been around for eight decades, but then again, this guy isn’t just anyone. He’s a legend.

Kristofferson, daughter Casey Kristofferson, Margo Price, and Ben Haggard, son of Merle Haggard, along with the Strangers, took the stage in Nashville recently to play before a sold-out crowd. Pleading an all-time classic, “Why Me Lord?,” the audience was reminded why the Oxford graduate and Country Hall of Fame singer/songwriter has long-been etched into the hearts of so many.

Taming the crowd with nothing but a guitar and his gravelly voice, Kristofferson joined Haggard and one of country music’s most famous bands, the Strangers on stage. Founded in 1965, the Strangers was Merle Haggard’s backup band and now tours with 25-year-old  Ben Haggard, continuing the family tradition.

It was obvious the standing-room-only crowd was happy to hear the country and gospel classic written by Kris and originally released in 1972. As with every song, it has a story behind it. It also became the biggest hit of the singer’s career.

The song was inspired by an experience the author/artist had after attending church services and hearing gospel singer, Larry Gatlin, serenading the congregation with “Lord Help Me.”  Kristofferson found himself crying and after making his way to the front of the church to profess his new-found faith, “feeling a huge sense of relief and forgiveness he didn’t even know he needed.”

Kristofferson and the younger Hag have joined forces before to honor the memory of Merle. This particular show was significant in that it brought together musicians who played with both Kristofferson and Merle Haggard over the course of 49 years.  This performance is truly a collector’s item for every person fortunate enough to be be present.

What do you think of Kristofferson and Ben Haggard’s rendition of “Why Me Lord?” What’s your favorite memory of Kris Kristofferson, actor and singer? Watch them throw back and share your thoughts below.