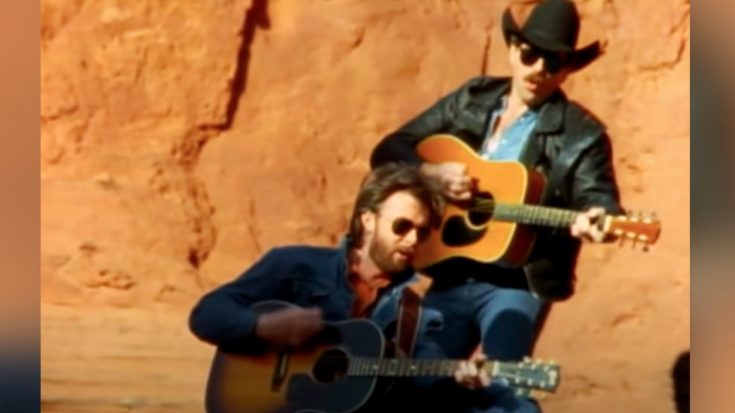 Where country duos are concerned, no one can come close to competing with Brooks & Dunn. Out of their 50 total singles, 20 have been chart-toppers, and 19 more have been Top Ten hits. Not to mention the fact that they are also record-holding CMA Award winners, with a total of 14 Vocal Duo of the Year wins between the years of 1992-2006.

It’s clear to see that Brooks & Dunn had a good thing going on. So that’s why it was especially surprising when in 2009, the duo announced their intentions to retire the following year.

Ok so why would Brooks & Dunn retire? I'd love to hear people's thoughts on this one. I am not happy about this.

Once they retired in 2010, rumors began to swirl about the duo’s breakup. Many insinuated that the two parted ways because they didn’t get along, even though they said otherwise during an interview in 2009.

Getting Down To The Truth

When asked about their decision to split, Kix Brooks told CMT that it was a mutual decision, and that they were “still good friends.” Ronnie Dunn echoed him, saying that they “ended up more like brothers.”

Despite their statements, nasty rumors about their breakup continued to pollute the country music community. So nearly eight years later, Brooks finally addressed those rumors, and is exposing the true reason why they split.

During an interview with Music Row, Brooks wasted no time in addressing the rumors that he and Dunn didn’t like one another. As he explained, the two of them were thrown together as a duo and experienced unexpected success long before they even had an idea of who they were as individual artists:

“Basically we were offered a record deal without ever even having met,” he said, referring to how music executive Tim DuBois encouraged them to write a song together. “Our first four singles went No. 1. It happened so fast, we wanted to take advantage of it, but at the same time we didn’t have a chance to come up with any personal dynamic. I was 36, Ronnie was going on 40 years old when we met. I can’t think of another case in music—I mean I don’t know any other acts where that kind of thing has happened to them.”

They Wanted Their Own Identities

As Brooks revealed, he and Dunn thought the idea of being a duo was “absurd” from the start. But once their career took off, they realized they had to continue working together to keep experiencing such success.

Even though they were a superstar duo, it didn’t take long for the two to start wanting a little more as individuals.

Brooks said that as a duo, there were always compromises to be made between the two of them. Those compromises eventually prompted questions over how long they could last together:

“As a duo there was always a certain amount of compromise that came with making records, etc. Ronnie evolved as a dynamic singer. For me, did I really want to be a side guy playing guitar? I had always had bands growing up. Obviously from a success standpoint it was extremely rewarding, but at some point it comes with so many compromises you step back to question, what am I really doing here?“

Brooks said that the decision to break up didn’t come because he and Dunn disliked each other, but rather, because they wanted to rediscover who they were as individuals.

What They Did After Breaking Up

After splitting, the two got the chance to explore solo careers and other projects that they weren’t able to take up while they were in Brooks & Dunn. In Brooks’ case, he got more time to devote to his radio show. For Dunn, he picked up photography.

After a five-year break as a duo, Brooks & Dunn got a call from the folks at Caesars Palace in Las Vegas asking them if they’d like take part in a residency there with Reba McEntire. Brooks admits that they never thought they’d bring back Brooks & Dunn again, but the opportunity seemed too good to pass up.

Feeling refreshed after their break, the two agreed to the residency:

“I don’t think we had much intention of doing Brooks & Dunn again, because we had gone as far and high as we expected to go. After some time apart when Caesars came to us asking if we would like to do the residency, and especially with our dear friend and big sister Reba, we were like, ‘You know what? It would be fun to sing these songs again.‘” Brooks said.

Brooks & Dunn’s residency in Las Vegas lasted for many years. They also released a new album together, called Reboot, and are were inducted into the Country Music Hall of Fame in the fall of 2019.

Before each of their Vegas shows, Brooks said he and Dunn spent “about an hour” chatting in the dressing room every night, and that the two of them planned a hunting trip together. In other words, they definitely don’t dislike each other…they just needed a little time apart.

“It took five years off for us to find the fun spot, musically and professionally again,” Brooks said.

We don’t know about y’all, but we’re glad that Brooks & Dunn found that “fun spot.” See just how good the dynamic is between the two of them by watching Brooks’ radio interview with Dunn and Rascal Flatts‘ Jay DeMarcus in the clip below.