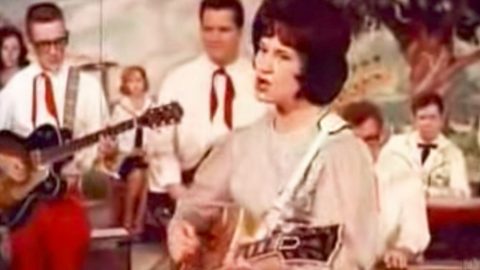 Breaking down barriers, Kitty Wells was highly regarded by her fans and fellow country singers as the first female country star. The dark-haired beauty graced the stage of the Grand Ole Opry back in 1952, capturing the hearts and praise of anyone and everyone that idolized the woman and her breathtaking talent.

“As a favor to me and of course I know to the folks out there, they’ll love this one, would you mind doing a special song?” the host asked Wells. Upon requesting “It Wasn’t God Who Made Honky Tonk Angels,” she was more than happy to perform her timeless hit, breaking into the gradual intro to the heavenly ballad.

“It wasn’t God who made honky tonk angels/ As you said in the words of your song/ Too many times married men think they’re still single/ That has caused many a good girl to go wrong,” she beautifully sang.

Viewers, both of the live event and decades after its release, were mesmerized by Wells and her talent, desperately clinging to her iconic lyrics.

This timeless tune was a direct response to Hank Thompson’s hit “The Wild Side of Life,” blasting cheating men for single-handedly creating unfaithful women. The song skyrocketed to number one on the charts and snagged Wells the first, top ranked single achieved by a female artist.

You can watch this heartwarming performance below.