History Behind The Curse Of The Grand Ole Opry 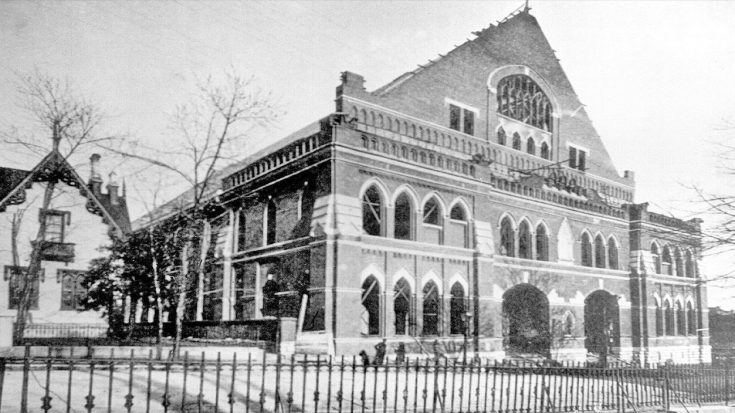 The Grand Ole Opry has gone down as one of the most famous venues in America. From country music legends to today’s stars, the best of the best have made their mark on that stage. Before it was the Grand Ole Opry, the Ryman Auditorium housed many of the shows that went on in Nashville. But behind the curtains and bright lights is a dark side that many people don’t know about.

History Behind The Ryman

The Ryman Auditorium opened in 1892 as the Union Gospel Tabernacle. The tabernacle was built by a man named Thomas G. Ryman who worked as a steamboat captain and was widely known for his hard drinking. It was one day that the captain found God and threw out his bottles for The Bible. He turned the tabernacle into a place of worship where all people could come together.

As more citizens learned about the venue, it was obvious more space was needed to accommodate comfortably. In 1897, that necessity came to life. After hosting a large reunion of Confederate veterans, they were so thrilled that they provided the funds to have a balcony built. It was later named the Confederate Gallery in their honor. As the years went by, the crowds only continued to grow. It quickly became known that the folks who sat up on the balcony had quite the rowdy behavior.

One guest, in particular, never left though. Over the years, a mysterious “man in gray” has been sighted on several different occasions. While witnesses claim to have never seen him during performances, he has no problem showing up for a late night visit. Maintenance workers and security guards have claimed to see the Gray Man sitting up on the balcony after the audience has left. There has even been talk about him showing up during rehearsals.

Q: What are your Halloween plans? A: The Haunted History Tours at the Ryman! http://bit.ly/RymanHalloween

Nonetheless, when anyone tries to catch him in the Gallery, it is empty without a stranger in sight. Residents have had trouble figuring out who the uninvited visitor might be but they know one thing for sure… he doesn’t haunt the Ryman alone.

For decades, legend has said that Captian Ryman himself is haunting the famous auditorium. The first stories of seeing Captain Ryman’s ghost began in the early 1900s. A production of Carmen was being put on at the theater and fans of the show were certain he would not have approved. It was said that his spirit made so much noise that guests would continuously complain about not being able to hear what was going on due to the disruptions.

Christmas Day 1904 the Ryman (then known as the Union Gospel Tabernacle) held the funeral of Captain Thomas Green Ryman,…

Fast-forward to 1943 when the Ryman became home to the Grand Ole Opry. Throughout the 60s, many specials were tapped there including a live radio show and the Jimmy Dean Show. After one of the shows, a crew from New York came to town to talk with some locals. After being told about the ghost of Captain Ryman, the New Yorkers decided they wanted to see it for themselves. Later that evening, the crew hung around for what was a very uneventful night.

Until around midnight, the crew heard footsteps coming from inside the empty theatre. As they looked up, they could see dust falling down between the edges of the ceiling and panels beneath the Gallery. As the footsteps would continue forward, bits of dust would fall. They quickly fled the building fearful of their eye-witness encounter.

Another famous guest known to be haunting the Ryman is the spirit of Hank Williams after his death in 1953. It all began with “Whisperin'” Bill Anderson, who was checking sound levels on his guitar during a rehearsal. When he went to strum a favorite Hank Williams tune, everything in the building went dead. The sound, the lights, the house lights, and even the emergency exit lights went out. They later found no cause behind the blackout as Anderson described the experience to be “eerie.”

Hank Williams Sr. took to the microphone for his Grand Ole Opry debut on June 11, 1949, electrifying a live audience at…

While stories get passed down from generation to generation adding more detail every time, one undeniable legend still remains in the same structure: The Grand Ole Opry Curse.

After the Ryman re-opened in 1993 after years of renovations, it was almost torn down yet again. Many people claim that Opry officials seemed rather eager to tear the building down as they believe it was home to “The Opry Curse.” While a majority of the people who work with the Opry deny that the curse exists, it hasn’t stopped the rumors from persisting.

It came about when citizens began noticing that up until 1973, more than 35 people closely associated with the Opry had met untimely deaths. Several country stars over the years had been robbed, shot, been in plane crashes, and have fallen victim to alcohol and drugs. While skeptics believe that is just part of working in the hustle and bustle of the industry… others swear the curse holds all the reasoning.

Of course, the decision is yours to make as you consider the past tragedies that occurred.

"Patsy, honey", and she turned around, "be careful, baby, we sure love you…" said Ray Walker, The Jordanaires. And she…

Not to mention the others that felt the wrath of the horrified curse.

Let us know what you think of the legendary Opry Curse and if you’ve experienced any paranormal activity at the Ryman yourself.