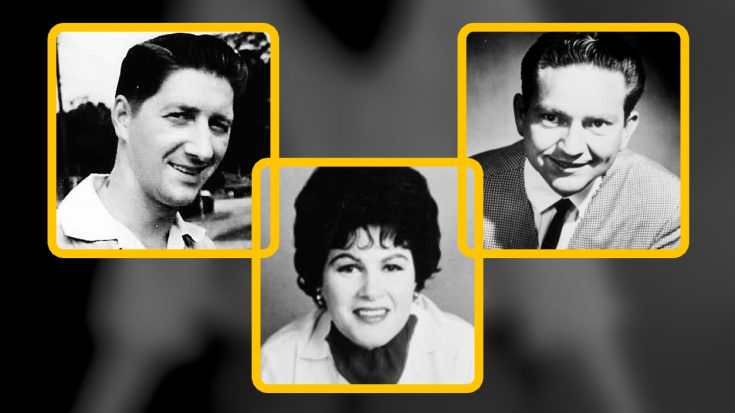 Every day, hundreds of songs are written with the hopes they’ll one day be recorded. And every day, artists go out in search for a perfect song they can record.

Sometimes, songs sit unrecorded for ages, waiting for the perfect person to come along. Then, some twist of fate or lucky circumstance suddenly tosses the song into an artist’s hands, and magic is made.

That’s exactly what happened with one of the most iconic songs in country music history…Patsy Cline‘s “Crazy.”

The Hidden Figure Behind The Hit Song

Few people realize this, but another famous country music figure is the person you can credit for penning “Crazy.”

That person is none other than Willie Nelson. At the time, his main source of success came from songwriting because he didn’t have a hit recording of his own.

Nelson wrote “Crazy” in early 1961, hoping that popular country singer Billy Walker would want to take it on. But unfortunately for Nelson, Walker turned it down, saying it sounded like a song better suited for a female singer.

While it was a minor defeat, Nelson didn’t stop believing in “Crazy.” He was determined to have it recorded, but didn’t know if he ever would.

This is where the twist of fate comes into play.

One night, Nelson went down to the famous Tootsie’s Orchid Lounge in Nashville with a unique idea. He was going to play his own recording of “Crazy” on the bar’s jukebox and see if it sparked anyone’s interest.

If it was any ordinary night, it’s highly likely that no one would have paid the song any mind. If so, Nelson could have spent the next several months, maybe even years, trying to get someone to sing “Crazy.” Even worse, it could have sat unrecorded forever.

However, the stars aligned for Nelson on that fateful night, and Patsy Cline’s husband, Charlie Dick, happened to be at the bar.

RIP Charlie Dick, husband of the great Patsy Cline. Lucky enough to meet him-even sat on his lap! He will be missed. pic.twitter.com/iVKG7NG2aT

As Nelson recalled in a 2017 interview with SiriusXM, Dick was instantly intrigued by the song, and thought it was something that Cline would enjoy. Even though it was past midnight and he and Nelson were both intoxicated, Dick decided it was a good idea to take the song to his wife right then.

Nelson went along with him, and stayed out in the car while Dick went inside to talk to Cline.

According to Nelson, Cline came outside and made Nelson get out of the car, telling him that she wanted to hear the song. So he played “Crazy” for her, and she was just as intrigued by it as her husband had been.

Authored by Ellis Nassour, the biography Patsy Cline tells a slightly different story. While it maintains the Tootsie’s tale, the biography claims that when Dick took the song home, Patsy hated it because of the way that Nelson “spoke” as he sang. Her remark supposedly was that she “couldn’t sing like that.”

The biography also claims that it was Cline’s producer Owen Bradley who loved the song, and he turned it into the slower arrangement she eventually recorded.

The Legacy That Came About Because Of Pure Luck

No matter which version of events you believe, what matters is that Cline recorded “Crazy.”

The song became one of the biggest hits of her career, and reached the second spot on the Hot Country Singles chart while also claiming the ninth position on the all-genre Hot 100.

Just think, if one tiny thing had been different about that night at Tootsie’s, Cline never would have known that “Crazy” existed. And without Cline’s voice behind it, the song may have never transformed into the beloved classic that it is today.

Thankfully, Nelson was in the right place at the right time. Thanks to his persistence and a little bit of luck, the world can now enjoy the sweet, sweet sound of Cline singing “Crazy” for generations to come.