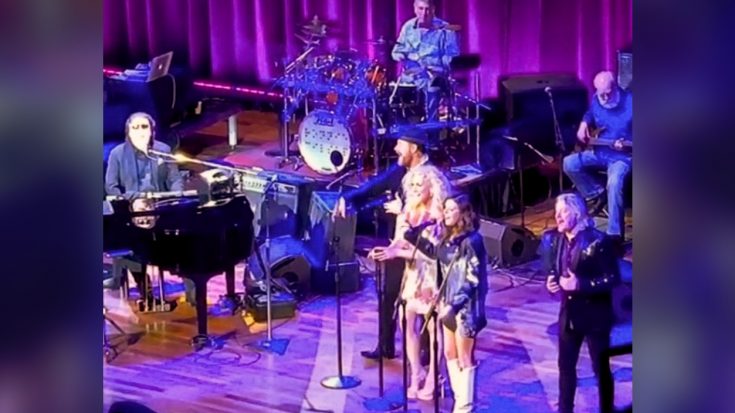 As one of country music’s last living legends, Ronnie Milsap is one of the genre’s most treasured artists.

Hard to believe it, but the “Stranger in My House” singer just celebrated his 76th birthday. Though based on his vigor and enthusiasm for performing, you’d never guess it.

When asked during a recent interview if retirement is ever in the cards for him, Milsap dismissed the idea.

“I don’t like to think of retiring,” he said. “Where the h— would I go? What would I do? The fact is I don’t want to retire, ever. I want to be here as long as God will let me stay here.”

Keeping true to his word, Milsap is proving that he’s here to stay with the release of a new album. This album, titled The Duets, features the country legend singing alongside other stars.

Just a few of the artists featured on the album include Dolly Parton on “Smoky Mountain Rain,” George Strait on “Houston Solution,” and Luke Bryan on “Stranger in My House.”

Another artist who jumped in to contribute to Milsap’s album was Little Big Town. The country quartet offered up their harmonies on one of Milsap’s most successful songs, “Lost in the Fifties Tonight (In the Still of the Night).”

The song topped the country chart and also crossed over, peaking at the eighth position on the Adult Contemporary chart. To this day, it remains one of Milsap’s most beloved songs.

Listen To The New Take, Live

If you loved Milsap’s original version of the song, you’re sure to dig his new rendition with Little Big Town. The group’s silky-smooth harmonies enhance the song’s natural sound, and give it even more of a doo-wop vibe.

Luckily, you don’t have to get your hands on a copy of The Duets in order to hear Milsap and Little Big Town’s collaboration. The talented artists came together for a live performance of the song on Wednesday night (January 16) during Milsap’s birthday celebration at the Ryman Auditorium in Nashville.

One attendee happened to catch the performance on film, and while you can’t see Milasp and Little Big Town all that well, you can hear them perfectly! If they sound this good singing together live, you can only imagine how good the recorded version must be.

Go ahead and check out this remarkable teaming of talent by tuning in to the video below. The group’s harmonies fit Milsap’s hit song like a glove, as if they were always meant to be a part of it!