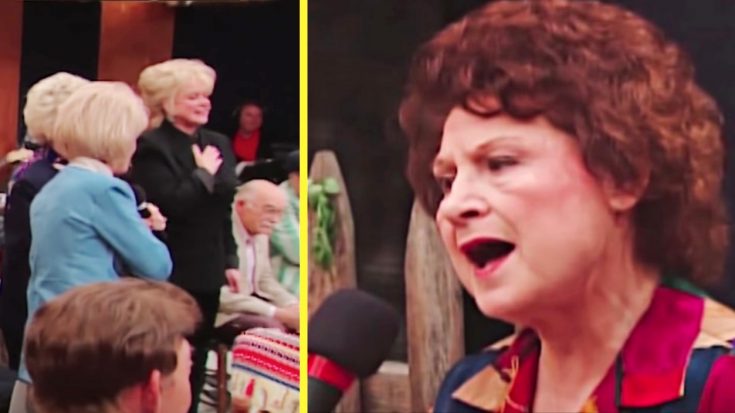 In the 1950s, there were a handful of female country singers that paved the path for future generations of artists. Kitty Wells was one of these pioneering ladies. In this rare recording of her hit song, “It Wasn’t God Who Made Honky Tonk Angels,” she is rightfully saluted by her fellow country gals.

Born in 1919 as Ellen Muriel Deason to a railroad brakeman – Kitty Wells changed her name and her entire life as she grew to popularity in the 1950s. Building on her years of singing with her sisters as a teen, Wells developed her own sound and ended up becoming the first female to ever top the U.S. country charts.

Heartland remembers the legendary Kitty Wells, born on this day in 1919. pic.twitter.com/8sGfglUwAR

Her hit song, “It Wasn’t God Who Made Honky Tonk Angels” was a response song to Hank Thompson’s “The Wild Side Of Life” in which Thompson calls out the woman who broke his heart by returning to a crazy lifestyle of dancing and drinking.

In her song, the strong spirited Wells points the finger right back at the man singing “The Wild Side Of Life” saying, “It wasn’t God who made honky tonk angels/ As you said in the words of your song/ Too many times married men/ Think they’re still single/ That has caused many a good girl to go wrong.”

Her bravery in singing the response to Thompson’s song and unfaithful men paved the way for artists like Tammy Wynette, Dolly Parton, and Loretta Lynn to do the same.

Backlash In The ’50s

Her song blamed not God for creating honky-tonk loving gals but unfaithful men for breaking their hearts in the first place. Her daring approach to the music industry during the 1950s originally received backlash for its female-focused sentiments. NBC radio actually banned the song and she was prohibited from performing it on the Grand Ole Opry stage.

Still, Wells continued to have an incredibly fruitful career and “It Wasn’t God Who Made Honky Tonk Angels” outsold Thompson’s “The Wild Side Of Life” and peaked at #1 on the US Billboard Hot Country Songs list.

During an intimate performance posted by Country Road TV, Kitty Wells got a salute fit for a queen. Surrounded by a group of women singing her song by heart, Wells gave a once-in-a-lifetime performance of her 1952 hit.

During one inspirational moment, some of the ladies even stood up and saluted “The Queen of Country.” You can watch the full, sass-filled video below and for more classic country music, check out Country Road TV. The folks over there really know what country music is all about!