Kelly Clarkson Performs “Cowboy Take Me Away” For “Kellyoke” 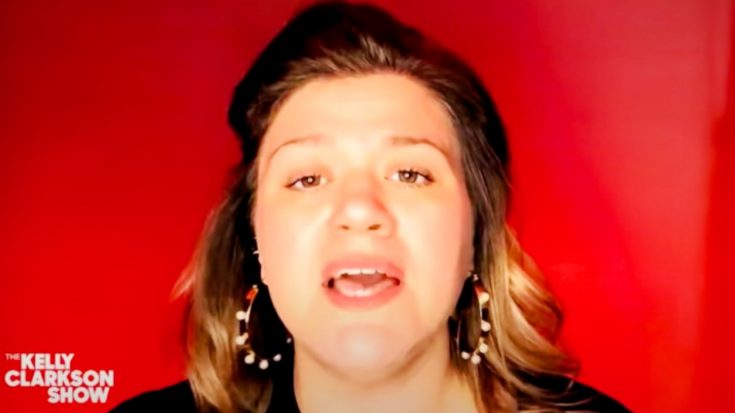 Kelly Clarkson went country for yet another one of her “Kellyoke” segments. Ever since her talk show, The Kelly Clarkson Show, started in 2019, Clarkson has covered dozens of songs from all genres, including country.

Some past country songs to earn the “Kellyoke” treatment include Carrie Underwood‘s “Before He Cheats,” Deana Carter‘s “Strawberry Wine,” and Patsy Cline‘s “Walkin’ After Midnight.”

For some time in 2020, Clarkson was unable to have any other collaborative “Kellyoke” performances in person. She did manage to orchestrate a virtual “Kellyoke” duet with Trisha Yearwood, and continued to share solo performances as well.

For one of her solo performances, Clarkson turned to another beloved country tune…”Cowboy Take Me Away.”

“Cowboy Take Me Away” was released in November 1999 as the second single off of The Chicks‘ album Fly. The song soared to the #1 spot on the Hot Country Songs chart and reached the 27th position on the all-genre Billboard Hot 100.

Since Clarkson couldn’t be with her band at the time, each one of her band members contributed to her “Kellyoke” cover of “Cowboy Take Me Away” by filming their parts in their own homes.

As for Clarkson, her vocal performance is worthy of praise. We could go on for ages describing how passionate her delivery was or how smooth her voice sounded, but think it’s best if you hear the performance yourself.

Tune in to the clip below to watch Clarkson sing “Cowboy Take Me Away” for “Kellyoke.” She did a stand-up job with this, leaving us anxious to hear her take on other country tunes.

Which country song would you like to hear Clarkson sing for her next “Kellyoke” session?