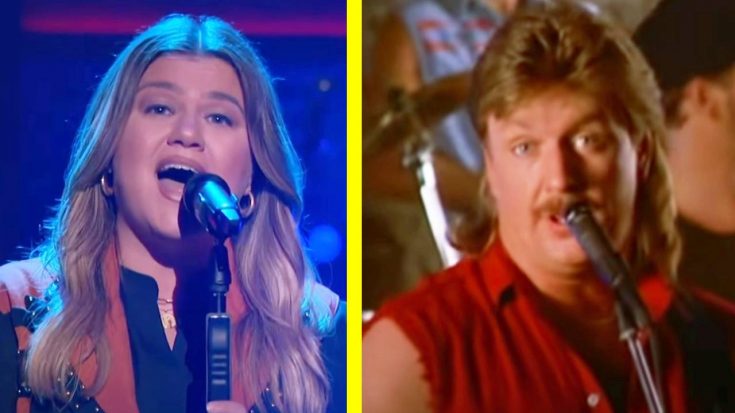 In 1993, Joe Diffie released his third album Honky Tonk Attitude and it produced four singles, all of which landed in the Top 20. One of those singles was hit #3 hit “Prop Me Up Beside The Jukebox (If I Die).”

The song was a staple at his live shows for many years, but after Diffie passed away from COVID-19 complications in March 2020, this song has become more meaningful to his devoted fans. “Prop Me Up Beside The Jukebox (If I Die)” is about a man telling his friends that while he doesn’t fear dying, he does want to be laid to rest where he feels most himself, in a honkey tonk next to the jukebox. In the song, he even sings that he wants his headstone to be neon.

About 15 months after Diffie’s passing, Kelly Clarkson paid tribute to his iconic song on her talk show The Kelly Clarkson Show for her “Kellyoke” segment on Wednesday, June 16.

She started the song off a little slower than Diffie did, making it all the more emotional as she sang the lyrics, “Well I ain’t afraid of dying, it’s the thought of being dead / I wanna go on being me once my eulogy’s been read.”

Just like Diffie, she upped the tempo for the chorus and made it sound like a real honky tonk performance. We’ve said it before: Clarkson’s voice is perfect for country music, especially this song.

We think Joe Diffie would be proud of this performance. Watch it below.