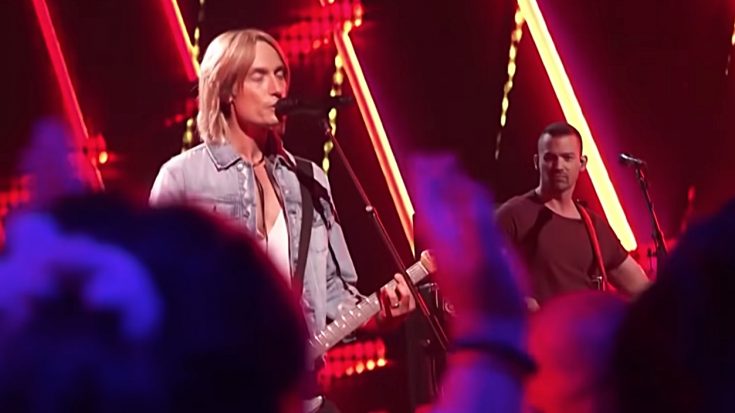 Adam Rutledge was competing on E!’s new music competition series, Clash of the Cover Bands for the chance to win big prize money and the opportunity to perform on The Tonight Show Starring Jimmy Fallon and he did one heck of a Keith Urban impersonation.

There are 20 Americans total competing in the competition with judges Meghan Trainor, Adam Lambert, and Ester Dean jdeciding who makes it on to the next rounds or who will have to try again later.

Adam knew he had to bring his best performance and to make a statement, and show the judges he was serious about this competition. He decided to dress up like Keith Urban and cover his iconic song, “Somebody Like You.”

With a low-cut, v-neck t-shirt, a blue jean jacket, and a dirty blond straight-haired wig, Adam transforms into the country music superstar and pleased the judges. Dancing, singing, and playing the guitar in front of a live audience, everyone clapped and cheered along.

He did a killer job but you should watch the performance below to see it for yourself. Then continue scrolling down to hear about what happened next!

After the performance was over, judge Meghan Trainor said that she was admittedly a big fan of Keith Urban’s music and that Adam did a great job, however, he needed to work on his stage presence.

They ultimately decided to move him onto the next round and pair him up with a vocal and movement expert to prepare Adam to be more comfortable on stage. Together, they practiced to make him better, and then he went on to the next round.

In the next round, Adam went head-to-head with a Tim McGraw look-alike and during this performance, he showed the judges and everyone watching that he was listening when they gave him advice. He was a lot more comfortable under the spotlights.

He sang Kieth Urban’s “Who Wouldn’t Wanna Be Me” and “Days Go By,” and really improved his stage presence. However, the Tim McGraw impersonator ultimately won the favor of the judges and that was the end of Adam being on this season’s Clash of the Cover Bands. Check him out below!

Watch The Head-to-Head Battle Below