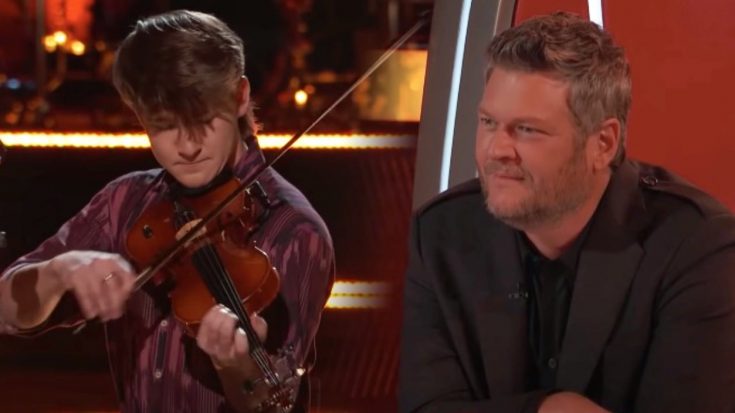 Carson Peters experienced a dream-come-true moment when all four coaches turned their chairs for him during the Voice‘s Season 21 blind auditions. The 17-year-old singer is a country artist through and through, so he chose Blake Shelton as his coach.

You may have seen Peters perform before he was on The Voice. The young artist has been in the country music scene for years now. He’s even played with Country Music Hall of Famer Ricky Skaggs.

In addition to being known for his voice, Peters has earned a reputation as an excellent fiddle player. In fact, many people know him by the nickname “Fiddlin’ Carson Peters.”

But Peters didn’t play his fiddle during his Voice blind audition. Though he promised to bring it out for a future performance.

Peters finally brought his fiddle onstage during his knockout performance. He remained true to his country roots, and covered George Strait‘s timeless song “Amarillo by Morning.”

It was amazing to see Peters showcase his talent as a fiddle player during his cover of Strait’s song. This was the moment his fans had been waiting for!

Unfortunately, Peters’ vocal performance faltered a little bit. The young singer’s nerves seemed to get the better of him, because his performance was not as strong as his past ones. As Kelly Clarkson noted, Peters had to sing in the upper end of his register, and he didn’t seem comfortable singing up there.

Granted, it’s hard to cover one of Strait’s songs. This is something his Shelton acknowledged, saying:

“Carson, it’s impressive to come out here and do a George Strait song, but that’s a tall order. And you know, having said that man, I think you did everything you could do to showcase your vocals.“

In the end, Shelton chose to send Peters home. His competitor and fellow country singer Lana Scott won the knockout.

Even though Peters’ journey on The Voice has come to an end, he can feel proud knowing he gave his final performance his all. Watch him sing “Amarillo by Morning” in the video below.

We wish Peters the best as he continues to chase his musical dreams!