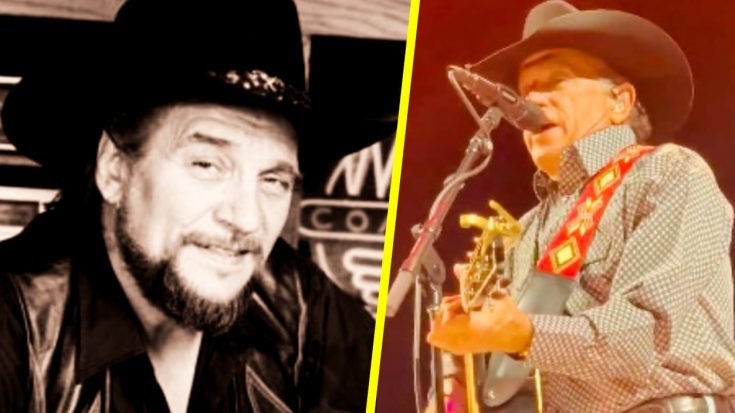 In 1974, Waylon Jennings joined his wife and fellow country outlaw Jessi Colter on Nashville Rebel. During their visit, Waylon took the time to sing a humorous song he wrote titled “Waymore’s Blues.”

As Jennings explained, the first part of the song is an ode to the late, great country singer Jimmie Rodgers.

But as the song progresses, it becomes more random and more comical. Jennings admitted he wrote the song as a joke to share with author and songwriter Shel Silverstein because he believed it made no sense whatsoever.

Despite its lack of sense or deep meaning, Jennings was a fan of the tune, calling it “a good song.”

Clearly others agreed, because “Waymore’s Blues” stands out in Jennings’ catalog. So you can imagine how excited one crowd of country fans got when another iconic artist decided to cover the tune during his set.

The artist we’re talking about is the “King of Country” himself, George Strait.

Ever since Strait kicked off his residency at the T-Mobile Arena in Las Vegas, he has kept audiences on their toes by including new cover songs in his shows. In the past he’s honored artists such as Elvis Presley, Merle Haggard, and Johnny Paycheck.

He opted to honor Jennings during his show on February 1, 2020 by delivering a lively rendition of “Waymore’s Blues.” One fan who appeared to be close to the stage managed to capture his performance on video and posted it online.

Strait seemed to lower his voice a bit to try and capture the rough, gruff tone of Jennings’ voice. Based on the sounds in the crowd, you can tell they were getting a kick out of his performance of “Waymore’s Blues.”

His band was also working hard to put forth an energetic cover. There were some long instrumental breaks, and Strait had a fun time jamming out with his band during those moments.

Strait’s cover of “Waymore’s Blues” was entertaining to say the least! Be sure to check it out in the clip below.