George Strait Treats 9-Year-Old Grandson To A Night Out 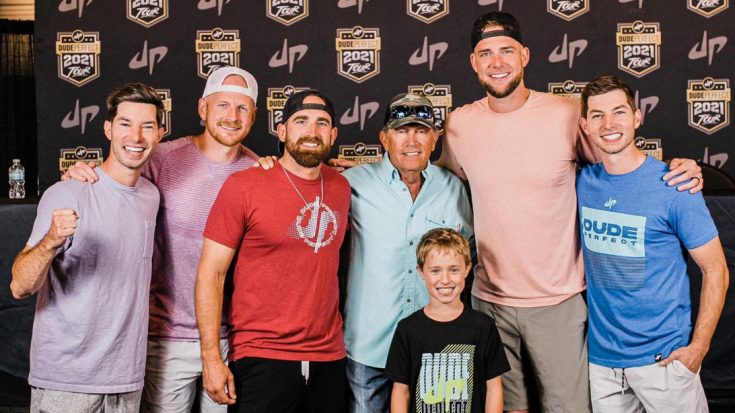 George Strait is in the running for Grandpa of the Year after treating his namesake grandson, George “Harvey” Strait III, to a night out to see one of the hottest shows in town (other than George’s, of course).

On Wednesday, September 29, Strait and his 9-year-old grandson attended the San Antonio tour stop of Dude Perfect, the world record-breaking fivesome who became one of YouTube’s most popular acts due to their crazy antics that include trick shots, stereotypes and stunts.

Dude Perfect shared on social media that they were surprised when the King of Country himself showed up at their pre-show meet-and-greet. One of the Dude’s, Tyler Toney, is a musician himself and admitted to pulling a “switcheroo” and asking George Strait to sign his guitar.

Strait and Harvey took the time to pose with Dude Perfect, and from the look of it, he had a great time hanging out backstage with the group.

This isn’t the first time King George has shared a special moment with his grandson. In 2019, Harvey joined him on stage at the Houston Livestock Show and Rodeo to sing “God and Country Music.”

Another special moment between the pair was captured when Harvey was just five years old and his grandpa recruited him to help bid at an auction held at the annual George Strait Team Roping Classic in San Antonio, Texas. In the clip, George stands behind Harvey and prompts him when it’s time to bid, saying “Raise your hand,” and “Put it down.”

Strait and his fellow spectators laughed as Harvey was quick to follow instructions given to him by his grandpa. When Strait was declared the winner of the auction, Harvey turned around to high-five his grandpa. See the adorable moment unfold in the clip below.