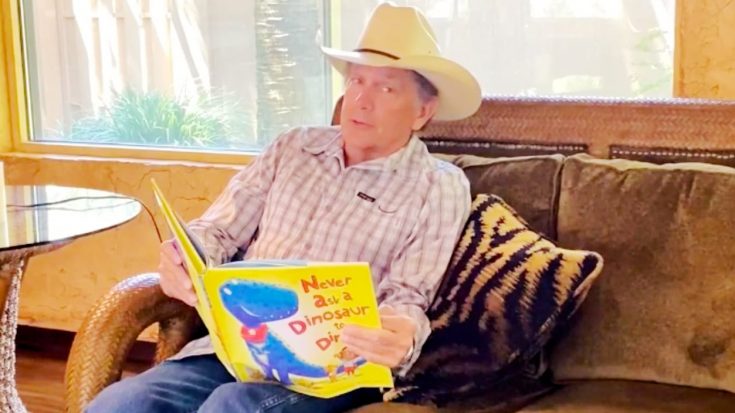 As a proud Texan, it was only a matter of time before George Strait contributed to the series. On Tuesday (May 5), folks finally got the chance to hear “The King of Country” read a children’s book when his storytime video debuted.

The book Strait read was Never Ask a Dinosaur to Dinner, which was authored by Gareth Edwards and published in 2014.

Other children’s books written by Edwards include The Big Animal Mix-Up, The Big Jungle Mix-Up, The Disgusting Sandwich, The Littlest Bird, and Fabulous Pie.

Never Ask a Dinosaur to Dinner was illustrated by Guy Parker-Rees. He has written and illustrated numerous children’s books, with his most notable work being Giraffes Can’t Dance.

This funny book by Gareth Edwards and Guy Parker-Rees always makes Ivy laugh. It follows a little boy as he goes through elements of his day – but he has chosen some rather crazy animal friends to help him with each task! He eats his dinner with a dinosaur who gobbles everything up before he gets a chance to eat a single bite. He uses a tiger as a towel when he gets out of the bath – and unsurprisingly the tiger is a little cross! He even tries to use a giant bison as a blanket which proves a little uncomfortable. Follow him as he discovers why dinosaurs, sharks, beavers, tigers, bison and owls don’t always make the best companions. The rhyme scheme is really bouncy which makes it a lot of fun to read and it’s also a good book for discussion. A barn owl might not be the best thing to cuddle up to at night because of his sharp claws and nocturnal habits – so what might make a better bed fellow? Read more of our reviews at www.ivyslibrary.com

Strait made sure to showcase Parker-Rees’ charming illustrations when he read Never Ask a Dinosaur to Dinner for the Stars of Texas Storytime series. Every time he finished a page, he turned the book toward the camera so the viewers could see the colorful pictures.

Wearing his signature cowboy hat and sporting a huge smile, Strait read through the entirety of Never Ask a Dinosaur to Dinner. Even adults remarked in the comments how entertaining it was to hear him read.

Who knew that Strait was such an engaging storyteller?

After he finished reading, Strait cracked a little joke with his audience, saying how they should never invite a dinosaur to join them for dinner. “I know I’m not going to,” he said. “Hope you don’t either.”

Tune in below to watch Strait read Never Ask a Dinosaur to Dinner. Listening to him will help you forget all of your worries for a few minutes!

George Strait, the "King of Country", reads "Never Ask a Dinosaur to Dinner" by Gareth Edwards.