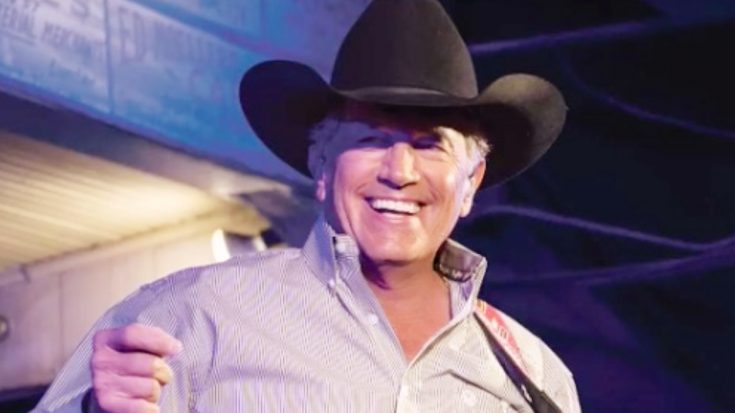 When you think of George Strait, one of the first things that likely comes to mind is “cowboy hat.” It’s understandable, since Strait is not only known for wearing a hat when he performs on stage, but is also a certified cowboy.

In between cutting hit singles and performing on stage, Strait would compete in rodeo events, including team roping. Everyone knows that it’s basically law for a rodeo star to wear a cowboy hat!

"Best of luck team ropers. I hope I see you down the road."

Strait has become so well-known for being a hat-wearing singer that few people have ever seen “The King of Country” without a hat perched on top of his head. There have been a few times that he’s stepped out in public in a hatless state, usually earlier on in his career.

One radio personality out of Cleveland, Ohio took to YouTube in 2011 to share a rare hatless photo of Strait that was taken during an interview he conducted with him in 1984. He had only been on the scene for a short while at that time, and had a full head of hair.

As uncommon as it is to find a photo of Strait without his signature cowboy hat, it’s even more of a rarity for Strait to share such a photo himself. But that’s exactly what the country icon did in celebration of Presidents Day in 2019, as he took to social media to share a photo recognizing one of our nation’s past leaders.

Not only does the photo show a young Strait without a hat, but it also shows him wearing a suit. Another rare sight…since he’s usually always seen sporting a pair of blue jeans!

It looks strange to see Strait all dressed up like that, doesn’t it?

At this point, it’s so odd to see Strait without his signature attire because his look has become just as “classic” as he is. He’s about to bring some of that old-school vibe to his upcoming project, a new record titled Honky Tonk Time Machine.

The album contains a wealth of material, including a song he recorded with his grandson, Harvey. You can enjoy that track by tuning in to the clip below.

No matter what he wears, one thing about Strait always remains the same…his talent!