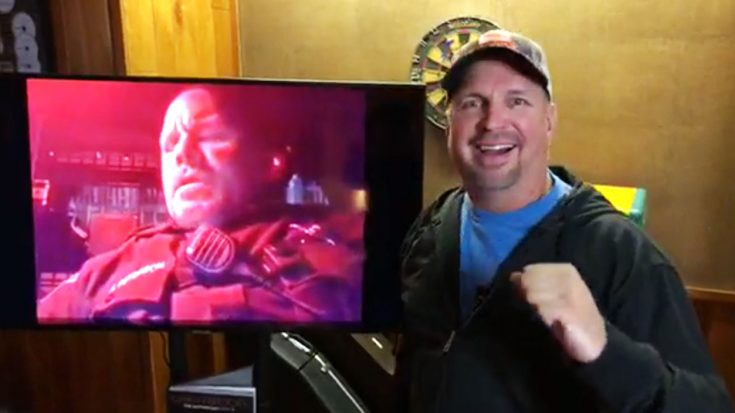 It was an insanely anticipated show that fans will be talking about for years to come. Selling out the 88-year-old Notre Dame football stadium, Garth Brooks was the first musician to perform a concert there. On October 20th, 2018, Brooks took the stage for a record-setting performance. With more than 80,000 fans showing up, this late-October country music celebration would go down in history.

You ALL made history tonight at Notre Dame! Thank YOU for letting me be part of it!! I am on top of the world knowing that we made a date to do it again! love, g #GARTHatND

As fans reassured the country singer that this was the perfect time to hold a concert in an outdoor stadium, northern Indiana weather had different plans. Brooks was forced to push his concert back an hour due to high winds but by the time that came around, it began to snow. With no worries behind him, Brooks carried on the concert with a roaring success.

Regardless of the unfortunate weather circumstances, Brooks fans still brought the heat filling every seat in the house. The two-hour event would include a set list of several of Brooks’ country classics such as “Friends In Low Places” and “That Summer.” Aside from his greatest hits, the singer even covered music icons such as The Beatles’ “Hey Jude” and Don McLean’s “American Pie.” During “Unanswered Prayers,” the singer handed off the mic to the crowd… the response was incredible. They could have finished the show for him with just their acoustic vocals!

It’s no doubt that Brooks has some phenomenal fans but one fan, in particular, caught the singer’s eye after the show. An officer who would be working the groundbreaking show posted to social media with a video before the concert:

“We are only less than 24 hours away now from the biggest concert probably of the century – definitely of my life – never anything bigger than this. Garth Brooks at Notre Dame, once in a lifetime deal.”

Officer Peterson then begins to sing the Brooks’ 2018 “All Day Long.” His vocals and country twang take over the song in one incredible cover. Sitting inside his police vehicle, uniform and all, it was clear Brooks had some talented fans. By the way Officer Peterson talked it was obvious he deeply admired the country singer! In 2016, the officer posted a picture of him with Brooks & his wife Trisha Yearwood.

You know, just hanging out with Garth and Trisha

Brooks was so moved by the video he posted it on his own Instagram for all his fans to see. With the caption,

“You could take my job, I could never do yours! Thanks for being the best at both! Stay safe! love, g”

Not only that but when Brooks first saw the officer’s video he was in complete shock. His reactions are priceless! Skip to 16:20 in the video below.

You could take my job, I could never do yours! Thanks for being the best at both! Stay safe! love, g #AllDayLong (Repost from Facebook — For the rest of #StudioG click link in bio)