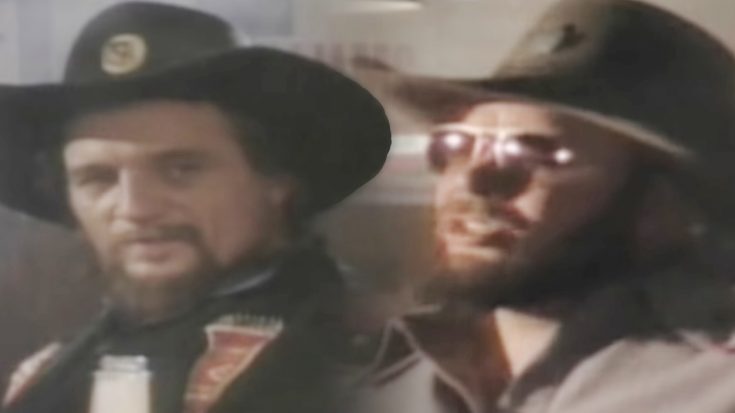 Waylon Jennings and Hank Williams Jr. had quite the friendship.

Thankfully for country music fans, they turned that friendship into a collaboration in the form of the song “The Conversation,” which is a fun discussion between friends about country music, and Hank Williams, Hank Jr.’s legendary father, in particular.

“The Conversation” was written by Richie Albright, Waylon, and Hank Jr. and recorded as a duet for Bocephus’ November 1979 album Whiskey Bent and Hell Bound.

Their collaboration was later released on Waylon’s 1983 album Waylon and Company, which was comprised of mostly duets, and was released as the album’s second single. The two outlaws made an accompanying music video, which was a rarity in the genre at the time. This marked Waylon’s very first music video, and Hank Jr’s second.

“The Conversation” was a moderate hit on the charts, reaching the Top 15 on the charts, but became a much more legendary song due to the singers’ fans who have loved it over the years. One of the people who love this song as much as the next guy, maybe even more, is a singer by the name of Andrew Pope.

The Alabama native looks up to both Waylon and Hank Jr. and according to his biography on Facebook, he has even performed with Shooter, Waylon’s youngest son. Pope came across an extremely rare recording of the two outlaw singers laying down guitar and vocals for “The Conversation” in Muscle Shoals way back when.

Pope wrote on his verified Facebook page that this find is “probably the rarest of the rare when it comes to my hank collection [sic].”

He also said he sent this particular recording to Shooter, who said he and his mom, outlaw legend Jessi Colter, had never heard this version of the song before.

The recording was uploaded by YouTube user Evan Skinner who wrote, “Hank and Waylon were kind enough to let my dad hit “record” while they were messing around in the studio in Muscle Shoals during the late 70’s. Then, this happened.”

What an incredible piece of history to witness! Turn the volume up, and press play below. You’re going to be glad you did. This in unlike anything we’ve ever heard before.