Singer Honors Johnny Cash With “God’s Gonna Cut You Down” 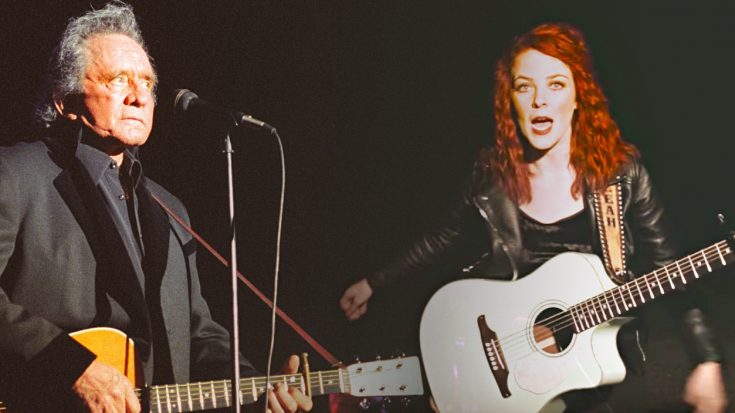 Johnny Cash‘s “God’s Gonna Cut You Down” has been a fan-favorite since he first released it in 2003. Since then, many artists have covered the harrowing song successfully but one young girl decided to give it a rock and roll twist and the video will leave you breathless.

Cash originally took the traditional folk gospel song and turned it into something more his style. The song was passed down through generations of artists and was even covered by gospel singer, Odetta, who Cash was a huge fan of himself.

While Cash’s version added some country-rock feels to the tune, the lyrics themselves are haunting enough.

So when singer-songwriter Aileeah Colgan wanted a slow-burning ballad to cover, the warning lyrics of “God’s Gonna Cut You Down” as sung by Cash were the perfect fit. Powder blue guitar in hand, the feisty singer gave her own edgy take on the country classic.

Her video features her singing amongst a variety of images presented in an eerie way. Throughout the entire film, her voice rings out giving the same warning to sinners as Cash did years ago.

Guys, I'm gonna be real mushy for a second. ? First off thank YOU for all your love & support. ? Secondly, I have to give a huge virtual hug & thank you to my team at @greenshoestudio for making all of this happen for me. Without them I wouldn't be where I am today. They're the hardest working team and I freaking love & appreciate each and every one of you! Thank you for believing in me even when I don't believe in myself. I am so incredibly blessed. @oceanna @jacob_colgan @ireneloveta @dave_rumer @jonathan_colgan

Aileeah feels right at home singing gospel tunes. According to her social media sites, she is “the daughter of a Baptist-preaching father and a gospel-singing mother.” Growing up singing in the church choir herself, she fell in love with classic artists like Johnny Cash and Loretta Lynn among others.

You can watch her full video tribute to Johnny Cash below.