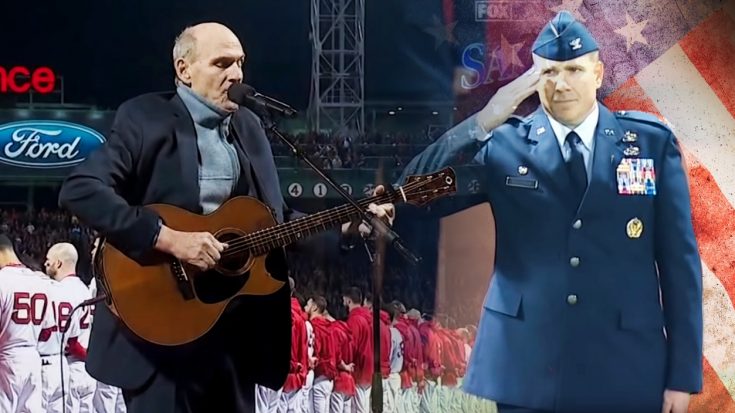 This beloved singer who has made chart history across multiple genres took to his hometown for the beginning of the 2018 World Series and gave them a truly memorable performance of the national anthem.

James Taylor, who is a Boston native, has achieved major successes throughout many genres of music and as a world-renowned singer/songwriter, he’s sold over one million copies of every record he made over a 30-year span.

Famous hits of his include many popular covers of other artist’s songs as well as his own handcrafted originals, but it was his own twist on our nation’s own anthem that really turned heads.

Exciting news: James will be singing the national anthem at Game 1 of the #WorldSeries TOMORROW at @FenwayPark! Catch it live at 7:56pm ET on https://t.co/0O33AM4LuQ. ? @Michael_Ivins courtesy of Boston @RedSox#JT #JamesTaylor #RedSox pic.twitter.com/a9dzgJ1trh

The date marked the 100th anniversary of the Red Sox winning the world series and not only is Taylor a native of Boston, but his family actually built Fenway Park way back in the day!

It's fitting that in the 100th anniversary celebration of the Red Sox winning the world series that James Taylor, whose family built Fenway, sings the anthem. And John Henry now owns the newspaper Taylor's family owned and hired a lot of us, including me, 50 years on.

His Own Take On A Classic

Taylor, who’s known for his folksy, soft rock sound is often referenced in today’s pop culture with his songs being packed into movies, commercials, and even covered by rising stars!

For this momentous performance, he brought out a guitar to the center of Fenway Park and played a soft-sounding folk melody to accompany him while singing “The Star-Spangled Banner” to thousands of excited fans.

James Taylor on the anthem. Giant flag waving on the monster…not bad, guys. Not bad. pic.twitter.com/Q7fWyvdxln

With each and every note, the sound was purely a James Taylor original. By the end, everyone attending this game from America’s favorite pastime was cheering with praise for him.

It’s a moment you’ve got to see for yourself – and we have it right here for you!

Check out James Taylor’s national anthem performance at Fenway Park below and leave your thoughts in the comments!