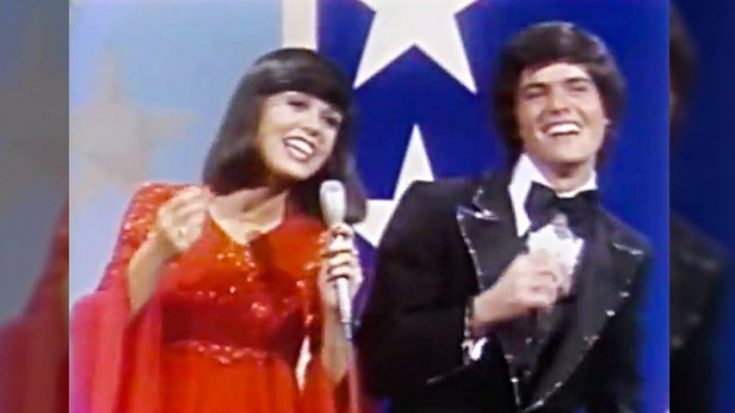 You can call them Donny and Marie. Most people do. The superstar brother and sister act has achieved sufficient fame to be known by nothing more than their first names.

The fifth and eighth of nine Osmond children, Donny and Marie separated from the pack long ago to each perform solo and then reunited for a successful sibling act.

Donny originally gained fame by singing with his older brothers as The Osmond Brothers. Marie set out to claim her own fame as a country singer scoring her first number one hit in 1973. Her cover of the Anita Bryant hit, “Paper Roses,” soared to the top of both the country and pop charts securing Marie’s place in the spotlight.

Meanwhile, brother Donny was climbing the charts solo with hits like his cover of Johnny Mathis’ “The Twelfth of Never.” While co-hosting The Mike Douglas Show the pair attracted the attention of network executives.

Taking note of Donny and Marie’s comical chemistry, their clever banter centered around sibling rivalry, and their immediate star power, the duo with the dazzling smiles hit it big. Donny, then 18, and Marie, then 16, made entertainment history by becoming the youngest in TV history to host their own variety show, called The Donny & Marie Show.

Anyone recognize this? 😉 Walking down memory lane today as we celebrate the anniversary of the #DonnyandMarie show’s television debut! One of my very favorite parts of the show was closing each episode with this song. @marieosmond, who would've thought we'd still be performing together daily in 2018? We owe each of you a thank you for making that possible!

Each episode of the Friday night show – for the first two seasons at least – featured an ice skating number, comedy skits and of course, songs by the talented duo. Without fail, Donny and Marie performed their signature song “A Little Bit Country, A Little Bit Rock and Roll,” a song made famous by their show.

The Concert Spot was a segment of each show where Donny (“a little bit rock and roll”) would trade-off singing a country music song with Marie (“a little bit country.”)

Five decades later, much has changed, but even more, it has remained the same. The superstar siblings landed in Vegas in 2008 prepared for an 11-week revue. They didn’t leave until late 2019.

Heading back to #Vegas and looking forward to the show tonight. If a 10-year residency & seeing our faces on the front of the hotel don't make a place feel like home, then I don't know what does! LOL We've missed you, @FlamingoVegas! #ShowTime #DonnyandMarie pic.twitter.com/LqXRKWi7zA

While their residency is now over, they will still be entertaining us. Marie is currently a co-host on the daytime show The Talk and Donny has some big plans up his sleeve.

As one critic put it, “Donny and Marie have spent their lives entertaining us. They’re not about to stop now.”

Now, get ready to travel back in time and relive teenaged Donny and Marie showing you why they’re still going strong after so many years!