Dolly Parton Shuts Down Reporter After He Asks Her About Politics 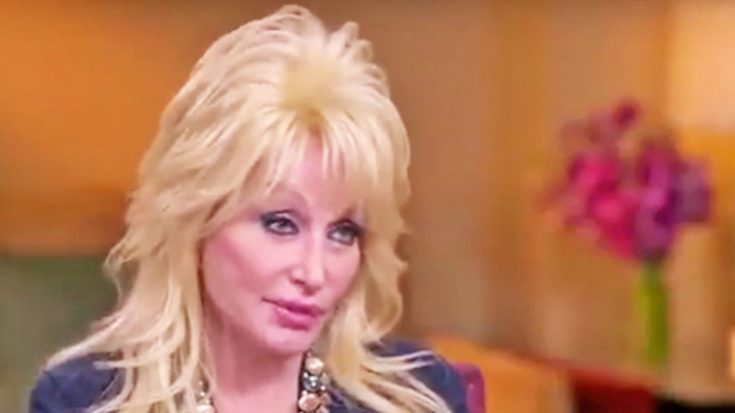 In September 2017, country legend Dolly Parton received a lot of flack for her 9 to 5 reunion with co-stars Jane Fonda and Lily Tomlin at the Emmy Awards. Although the trio received a standing ovation when they walked out arm in arm, the tone took a turn when Fonda and Tomlin made a dig at President Trump.

Parton refrained from the political talk and looked visibly shocked by her co-stars’ comments. She actually tried to lighten the mood by saying a joke at her own expense. Even though she didn’t utter a word about politics, people still ripped on Parton and flooded her social media with negative comments.

A month after the Emmys, Parton told PEOPLE, “I don’t do politics. I’m an entertainer. When I’m out there if all else fails, I just do a boob joke,” and that’s exactly what she did that night.

For some reason, even after this statement, Parton is continuously asked about her stance on politics, in particular, her views on President Trump.

This is the face you give people when they say you can't do something. Then go out and prove you can! #MondayMotivation

During a recent interview on ABC’s Nightline, the interviewer tried to get Parton to comment on politics.

“There are always prone to be political. And I had said up front, I am not being political. I don’t do politics. I’m not getting into any of that. Because I have a lot of fans out there and I don’t want to offend anybody.,” she said. “And besides, I don’t get into that. And so, if you are deciding you may want to ask me something more serious, don’t. Because I am not going to answer it.”

Even though she flat out told the reporter to not ask her about anything political, he did! Well, technically he didn’t ask her anything, he just brought it up.

“We do have a President of the United States who said those things on that bus,” he said, referencing President Trump’s comments that were recorded on an Access Hollywood bus with Billy Bush.

“I’m not addressing that. I do not get into that. Of course I have my opinion about everybody and everything, but I learned a long time ago to keep your damn mouth shut if you want to stay in show business. I’m not in politics, I’m an entertainer,” she said sternly.

I try to write songs that I think will fit everybody. The #PureAndSimpleTour has let me share these stories all over again.

Watch her take down the reporter with her sassy response in the video below.