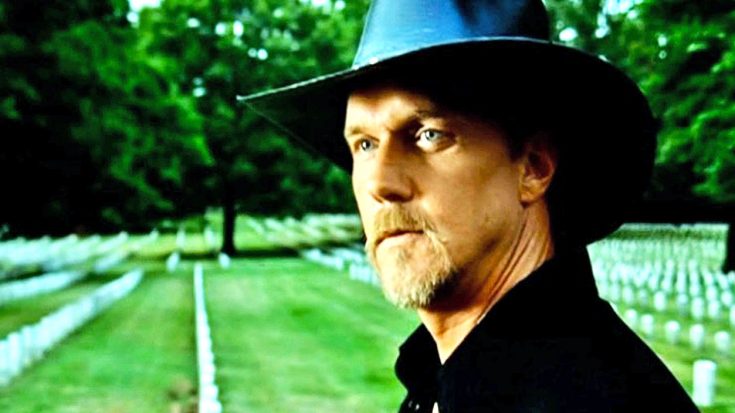 Trace Stands Up For The Military

Trace Adkins isn’t just known for his incredible country songs and signature deep vocals. As many know, he’s also a proud supporter of the U.S. military.

A night that just means more … Join us May 21 as we Salute The Troops and honor the U.S. Military with a very special Tuesday Night #Opry! ??

“Arlington” is just one of many songs Adkins has performed in honor of the men and women who serve and have served in the U.S. military.

Written by Jeremy Spillman and Dave Turnbull, “Arlington” was released in June 2005 as the second single from Adkins’ album Songs About Me. It peaked at #16 on the Billboard Hot Country Singles & Tracks chart.

A Little More About The Meaning

The meaningful song is narrated by a serviceman that was killed in action and is now buried at Arlington National Cemetery. The song was actually inspired by Tennessee native Corporal Patrick Nixon.

Did you know that "Arlington" was inspired by @USMarineCorps Corporal Patrick Nixon, who died in battle in 2003? #MemDayPBS

Nixon died in battle on March 23, 2003 after being ambushed while trying to secure a bridge in Nasiriyah, Iraq. After speaking to Nixon’s father, Turnbull felt inspired to make his story into a song.

In an interview with CMT, Adkins said he waited a long time to record a song like “Arlington”.

Trace Knew This Was The Song For Him

“I knew that was the song I had been waiting a long time to record,” Adkins said, while adding that he almost recorded John Michael Montgomery‘s “Letters From Home,” but decided against it.

That’s when “Arlington” fell into his lap.

“But then this song came along, and I said, ‘Oh, there it is. That’s what I’ve been waiting for.’ It’s just a nonpolitical song. It doesn’t glorify war at all or anything like that. It’s just simply paying tribute and homage and respect to the people who gave that last full measure.”

Billboard‘s Deborah Evans Price spoke the truth when she said, “Arlington is one of those singles that surpasses mere entertainment.”

Price goes on to talk about how well Adkins’ famous deep voice resonates with the story and emotion behind the song. She states that Adkins’ “deep, resonant baritone is the perfect vehicle for this hauntingly beautiful song about sacrifice, honor, and the cost of freedom…”

The song is represented well through Adkins’ official music video. It shows the country star walking through Arlington National Cemetery while he sings the haunting tune.

“Arlington” beautifully honors Corporal Nixon and every service member who has paid the ultimate sacrifice.