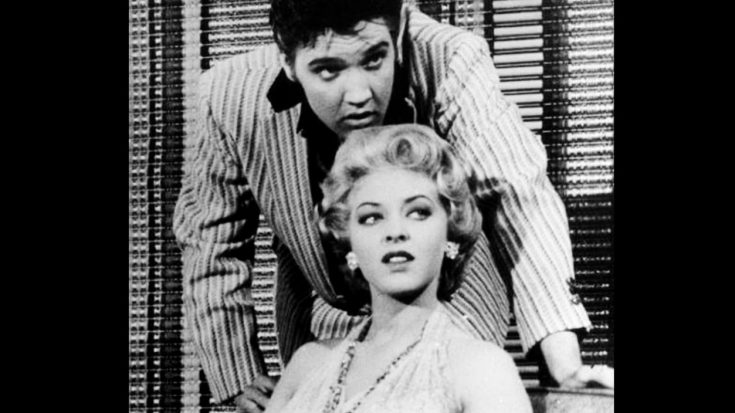 Over the course of his film career, Elvis Presley got the chance to star alongside some lovely and talented ladies. One of those ladies was actress Anne Neyland, who landed her first role as a chorus girl in the hit musical film Singin’ in the Rain.

After that, Neyland appeared in a couple of television shows and took on the role of Virginia Kelly in the 1957 crime drama, Hidden Fear.

That same year, Neyland also appeared in Presley’s third movie, titled Jailhouse Rock. Even if you’ve never seen the movie, you know its music, especially its title song, which topped multiple genre’s charts in the U.S.

In the film, Presley played a construction worker named Vince Everett who ends up in jail after accidentally killing a man in a barroom brawl. While actress Judy Tyler played his main romantic lead in the film, Neyland played another one of his love interests, named Laury Jackson.

But Neyland was more to Presley than a simple love interest in a movie. They were also lovers in real life.

The two dated throughout the making of Jailhouse Rock, and their relationship continued for a little while after filming concluded. Sadly, their love didn’t last.

RIP Anne Neyland who died on April 24, 2019 aged 84. She was already a popular model by the age of 16, quick to draw advertisers attention for her ‘peaches and cream’ complexion and her ‘All-American Girl Next Door’ wholesomeness. • Such was her popularity, that by the time Hollywood beckoned, she already had more than 30 beauty pageant titles under her belt. • Her pageant success was enough to catch the eye of MGM producers and director Stanley Donen, who gave her a small spot in the chorus line in "Singin’ in the Rain" (1952), afterwhich she returned home to her parents in Dallas. • She headed back to Hollywood in 1956, and got off to a good start, teamed with John Payne in director André de Toth’s Copenhagen set Film-Noir thriller "Hidden Fear" (1956). • Hollywood gossip columnists did their bit to promote the newcomer, linking her to the likes of Russ Tamblyn and Tab Hunter. However, it was on the arm of Elvis Presley which gained her the most attention, much to the chagrin of his then current squeeze Yvonne Lime. • The pair met whilst working on "Jailhouse Rock" (1957) – the most popular and arguably the best of Presley’s film efforts. The chemistry was instant as she acted the part of Laury Jackson – ‘the other woman’ in the teenage rock n’roll vehicle. • Despite the films success, Hollywood didn’t quite know what to do with her. Her next film, "Motorcycle Gang" (1957) which was aimed entirely at the teen drive-in theatre audiences. • By 1958, her romance with Presley had faded along with her film career. Neyland blamed the negative attention she’d received from Presley fans for her decline. • “He’s a joke, and anyone who associates with him is also considered a joke in this town. He is just a small town boy, animalistic and honest but small town. I want nothing more to do with what he stands for”. • Anne dabbled in television for a bit, before calling it quits after an unbilled bit in "Ocean’s 11" (1960). • All three of her marriages, including her first to writer Harold Crisswell (aka Christopher Welles) ended in divorce. • • #iusedtobeinpictures #anneneyland #actress #pagentqueen #model #jailhouserock #elvispresley #1950s #rip2019

Moving On After Elvis

Neyland perhaps offered some insight as to why their relationship fizzled out when she spoke to Photoplay on one occasion. Describing Presley, she said:

“These last three years he’s been so used to people tearing at him wherever he goes that he’s drawn-into as hell. He’s so used to being alone with a few close friends and going for drives and playing records that you can’t get him out of it.”

Neyland moved on with life after Presley and pursued other projects. She went on to to appear in a number of other television series in the coming years, and also took on roles in two films. Her last project, an uncredited role in Ocean’s 11, debuted in 1960.

Although she was born in Mississippi and grew up in Texas, Neyland moved to California later in life. It was there she took her final breath as she passed away on April 24, 2019.

Her family reported her death in a simple obituary published in the Ventura County Star. She was 84 years old.

No cause of death was listed in the short obituary, but Neyland’s family did share that her funeral arrangements were being handled by Griffin Family Funeral Chapels.

Our prayers go out to Neyland’s family during this sad time. She was such a beautiful and talented actress, and she’ll be dearly missed. May she rest in peace.