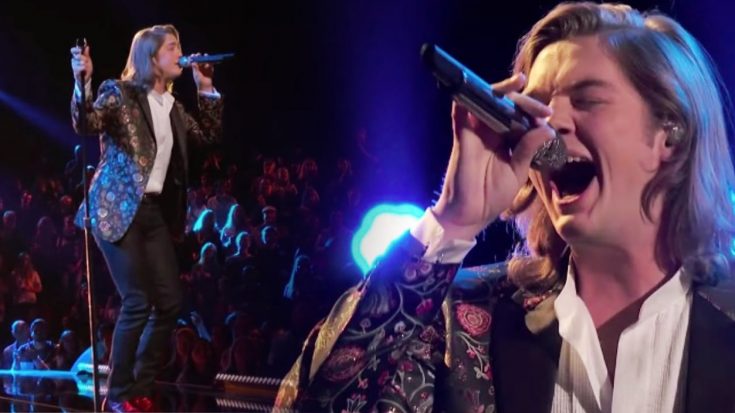 A Young Voice Star Stands Out

Blake Shelton was the luckiest of the four Voice coaches moving into the Top 24 in Season 16. Following the show’s new viewer-voted cross battles, he was left as the only coach with a full team of eight singers.

Kelly Clarkson and John Legend each had six artists on their teams, while Adam Levine had four on his.

Talk about COUNTRY STRONG! ?? @blakeshelton is heading into the #VoiceTop24 with the biggest roster.

One of Shelton’s standout stars was also one of the season’s youngest. At age 20, Carter Lloyd Horne has a voice and stage presence of a mature artist.

Back when Horne had his blind audition, Shelton and Clarkson were stunned when they turned their chairs and saw how young he was. Based on the sound of his voice alone, they assumed he was much older than he truly is.

Voice viewers were equally amazed by Horne from the start, and he quickly earned a heartthrob status. So you can imagine how thrilled people were when it was revealed he’d be performing Elvis Presley‘s “Heartbreak Hotel” as a member of the Top 24.

“Heartbreak Hotel” was released by Presley in 1956 and became a smash success. It topped multiple charts in the U.S. and therefore inspired numerous other recordings to follow. It remains one of “The King’s” most well-known works.

Carter Won Us Over With This One

Since “Heartbreak Hotel” is so beloved, Horne was under a lot of pressure to pull it off. But based on the way the audience and home viewers reacted, we’d say he succeeded.

Of course his voice sounded amazing on the song, but his stage presence sold the whole thing. He fully embraced Presley’s character in his performance, moving his hips and throwing in a few subtle dance moves that drove the ladies wild.

You just have to look at Twitter to see how well Horne succeeded at charming those who watched him sing.

#CarterLloydHorne is kicking some ass with the Elvis tonight. #TheVoice

In case you missed Horne’s performance of “Heartbreak Hotel” when it aired, be sure to check it out below. It sure is swoon-worthy!

Now that we know how well Horne does singing Presley, we’d like to hear him sing another one of his songs one day. Which one do you think would be a good fit for the young singer? We’d love to hear your thoughts!