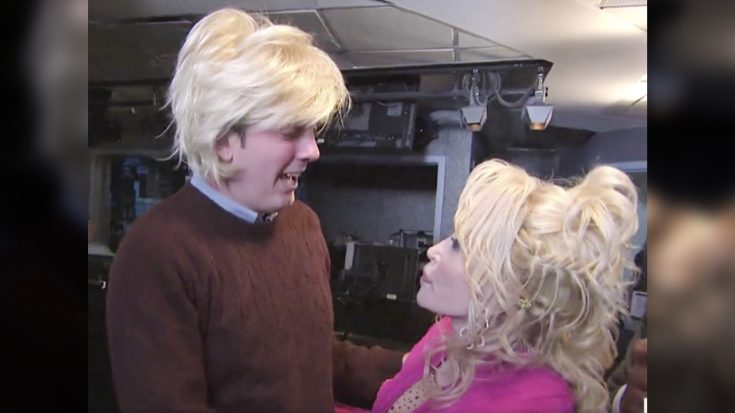 It is an eight-episode series where each episode will tell the story of one of Dolly Parton‘s famous songs including  “Two Doors Down,” “If I Had Wings,” “JJ Sneed,” “These Old Bones,” “Down From Dover,” “Sugar Hill,” “Cracker Jack,” and “Jolene.”

Because the premiere is so close, Parton is busy promoting the series. Her latest stop? The TODAY Show!

There, Hoda Kotb and Savannah Guthrie did the “Jolene Challenge” that Julianne Hough had announced on social media where fans can upload videos of themselves singing “Jolene.”

During another segment, Parton and anchor Craig Melvin ditched Kotb, Guthrie, and Al Roker to go into the control room, where all the staffers were wearing Dolly Parton wigs. They went to meet one person in particular, Production Assistant Harvey, who is a “super fan,” as Melvin described.

On the verge of tears, Harvey told Parton that he’s been a fan of hers for a long time, saying, “My family in Virginia loves you so much. I think my grandma’s watching and my family’s watching. I can’t believe this!”

He also told her she wrote “the most beautiful song ever written.”

After sharing several hugs, Parton went around the control room and gave everyone else a hug. How sweet!