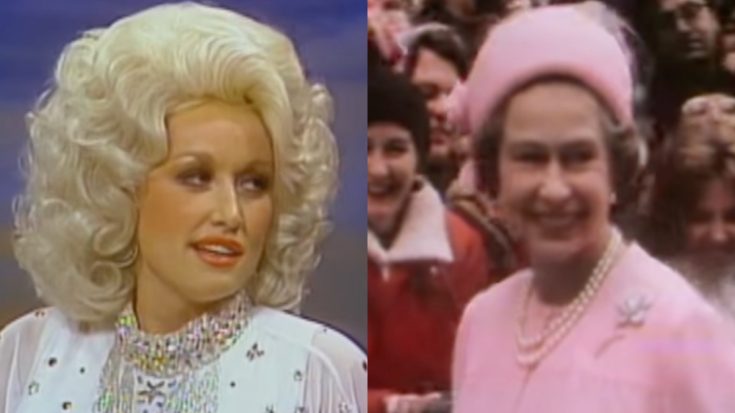 Few country stars have had the honor of meeting the queen of England. But in 1977, Dolly Parton’s manager surprised her with the news that she was going to meet Queen Elizabeth II.

Dolly Parton was scheduled to perform a series of concerts in Europe and thought that she was simply flying across the pond a few days early. But her manager, Sandy Galin, had a surprise for the “Jolene” singer.

“They kept it a surprise from me until I was on the flight over,” Parton told Glasgow Evening Times.

“When they told me on the plane I was appearing in front of the queen, I just jumped up and down telling everyone. It’s just one of the biggest thrills of my life. When I was a little girl I grew up in a world of kings and queens and princes and princesses in fairy tales. Now I was going to meet one.”

The performance was part of Queen Elizabeth’s Silver Jubilee celebrations, marking her 25th year as queen. Parton took the stage alongside Scottish vocalist Sydney Devine, English comedian Frankie Howerd, and the Jackson 5 for the event. But, it was what happened after the concert that made the greatest impression on Dolly.

“That was a great moment, I thought,” Dolly said this year of her meeting with Queen Elizabeth and Prince Philip, the Duke of Edinburgh. “It’s like I’m not a star worshiper, but as a kid, I was always intrigued by the kings and queens, and I always loved the magazines and the books and their costumes and all. Of course, they weren’t like the old kings and queen of the old stories, but it still had that romantic feeling to me to think, ‘That’s the Queen of England.’”

The country star sat alongside a black and white photo of her 1977 meeting with Queen Elizabeth and offered well wishes on the monarch’s 70th year as queen.

“I want to congratulate you on your Platinum Jubilee and your 70th year as monarch. I just wanted to say thank you for being wonderful. You are more than pearls and you are more than platinum. You have been a shining diamond in this world for so long, and everybody loves you. And I will always love you, too.”