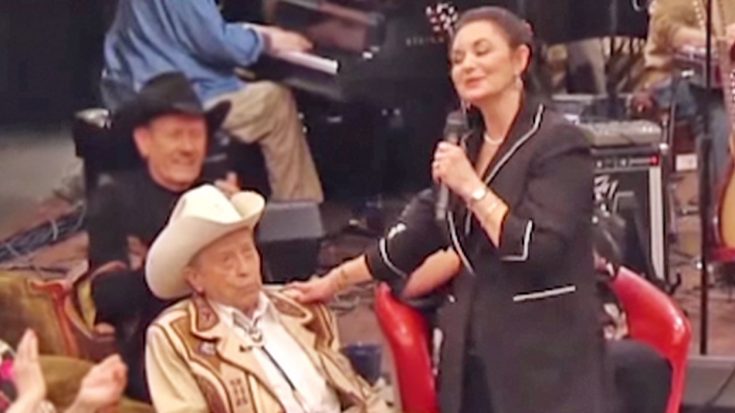 Over 30 years after its initial release, country singer Crystal Gayle brought the same youthful energy to her most recognizable song.

Have a wonderful weekend ????!

During an episode of Country’s Family Reunion, Gayle got up in front of a room full of her peers to perform her iconic song “Don’t It Make My Brown Eyes Blue.” She walked around the room singing her sweet ballad that put her at the top of the charts in the late 1970s. This performance is proof the she continues to get better with age!

At one point towards the end of the performance, Gayle went up to Little Jimmy Dickens and flirted with him, which he seemed to like – because he flirted right back! This made a few members of the audience giggle like schoolchildren.

She ended the performance saying, “I love you, Jimmy.”

While there isn’t a date attached to this performance, it had to have taken place sometime before Dickens’ 2014 death at the age of 94. Other country singers in the audience include Jim Ed Brown, who can be seen singing along,  Bill Anderson, Johnny Lee, T.G. Sheppard, and many more.

Posted by Woman of Country – Female Country Music on Saturday, May 2, 2015

History Of The Song

Gayle released “Don’t It Make My Brown Eyes Blue” in March 1977 as the first single off her album We Must Believe In Magic. Upon its release, the song became a massive worldwide hit. It was her very first – and biggest – crossover hit.

It went number one on the charts in the United States and Canada, and was a Top 20 hit or higher in Australia, the Netherlands, New Zealand, the UK, and Ireland.

On this day in 1977 @TheCrystalGayle received her first gold sales certification, a gold single for “Don’t It Make My Brown Eyes Blue” and a gold album for “We Must Believe in Magic” ✨??❤️ pic.twitter.com/wLkyik7fio

Ironically, despite the title of her now-signature song, the singer actually does have blue eyes.

Watch her performance, and her flirt with Little Jimmy, by pressing play below.