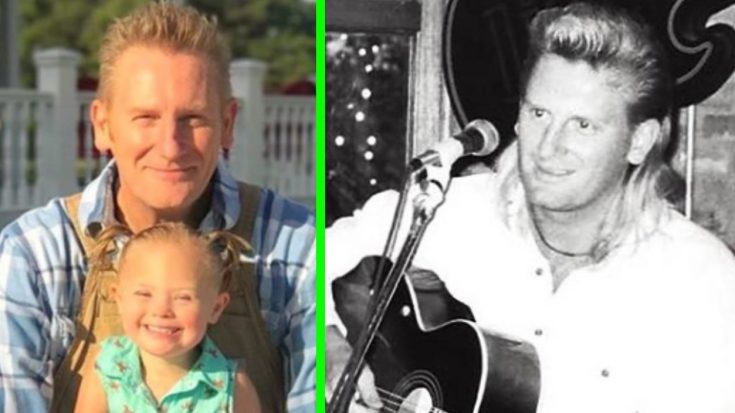 Today, Rory Feek is most well-known for being one half of the beloved country music duo, Joey + Rory. Alongside his late wife Joey, Rory brought us heartfelt songs about love, God, and the country lifestyle, including “That’s Important to Me,” “If I Needed You,” and “When I’m Gone.”

But before he met Joey, Rory was making his way in the Nashville community as a songwriter. You’ve likely heard songs written by him and never realized it, including Easton Corbin’s “A Little More Country Than That” and “The Truth About Men” by Tracy Byrd.

Out of all of the songs Rory ever wrote outside of Joey + Rory, his greatest hit was Blake Shelton’s 2004 single, “Some Beach.” The song reached the top spot on the U.S. Hot Country Songs chart, and reached the 28th spot on the all-genre Billboard Hot 100.

Years later, Joey + Rory performed the song together and the crowd thoroughly enjoyed it.

At the time that “Some Beach” was released, Blake was known for sporting a long, curly, mullet-like hairstyle. That is something y’all probably knew about before, but what if we told you that Rory once rocked a mullet as well? We bet you don’t believe it!

But we have photo proof that long ago, Rory was guilty of following the mullet trend that happened to hit country music for some reason. Only his mullet would have put anyone else’s to shame!

Taking to Instagram, Rory shared a pair of photos of him singing with his daughter, Heidi, who is also a singer. The first photo is more recent, while the second is one of the father-daughter duo when Heidi was young.

While the point of Rory’s post was to show how Heidi is still singing with him after all of these years, his mullet in the throwback photo stole the show. It’s something that Rory referenced with his hashtags, writing, “#cantexplainthemullet.”

Just swipe to the side on the picture below to see the photo of Rory rockin’ his mullet.

While Rory’s style has changed dramatically since those early days, the one thing that hasn’t changed is the connection he shares with his daughter Heidi. Watch the two of them perform together in the video below.

What do y’all think of Rory’s mullet? It was quite elaborate, wasn’t it?