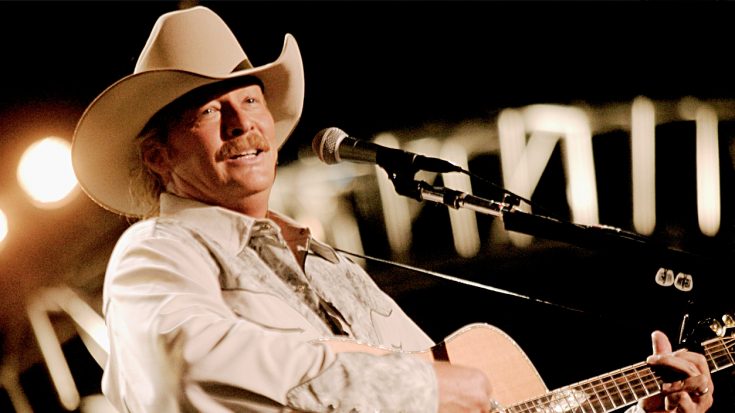 Traveling for years on end can definitely take its toll on you and after being on the road for his Honky Tonk Highway Tour, Alan Jackson has fallen ill in a sudden moment – and was so sick he had to cancel multiple shows and an ACM Honors event.

Due to illness, Alan Jackson's August 17 concert at Bank of New Hampshire Pavilion in Gilford, NH is being rescheduled –…

At first, Jackson announced that his August 16th and August 17th tour dates would be rescheduled, but now both of the venues have revealed that the dates are canceled with no make-up appearance happening.

For several concerts before the 16th, attending fans stated that Jackson had complained of feeling under the weather, but it wasn’t until he and his band arrived at the Wolf Trap venue in Virginia that he fell into a deep illness – and was in no shape to perform.

Illness Forces Alan Jackson To Postpone All August Concerts
Alan’s choice to call off the concerts was a sudden one, because his band was already at one of the venues. He must not be feeling too well… https://t.co/x8vH1fQ0Tr #AlanJackson pic.twitter.com/jai9FgUkt9

Now, Jackson has released a statement explaining exactly what illness he has been battling and the outlook for his recovery. On top of that, he extended a heartfelt thank you to the folks at this year’s ACM Honors program who honored him with the Cliffie Stone Award and his daughter who accepted it on his behalf.

“Just want to thank everybody at the ACM’s for honoring me with the Cliffie Stone Award last night at the Ryman. I’m sorry I couldn’t be there to personally accept it. Special thanks to my daughter Mattie who accepted for me. And thank you to Chris Stapleton, Jon Pardi, and Lauren Alaina for honoring me with their musical talents.”

From his statement, Jackson has been fighting a respiratory infection that first took hold before the performance scheduled at the Wolf Trap and has not improved enough for him to even make a brief appearance at the ACM Honors.

Thanks to everybody at the @ACMawards for honoring me last night. Special thanks to my daughter, Mattie, @ChrisStapleton . @JonPardi and @Lauren_Alaina! And special thanks to all my fans! pic.twitter.com/8bddFm3WRW

“And most of all thank you to all my fans for their prayers and well wishes as I continue to recover from a respiratory infection. I’m on the mend and will be back to normal soon!”

We are glad he’s on the mend and hope that he makes a full and speedy recovery. Our prayers are with him!

Listen to one of Alan Jackson’s newest songs below.