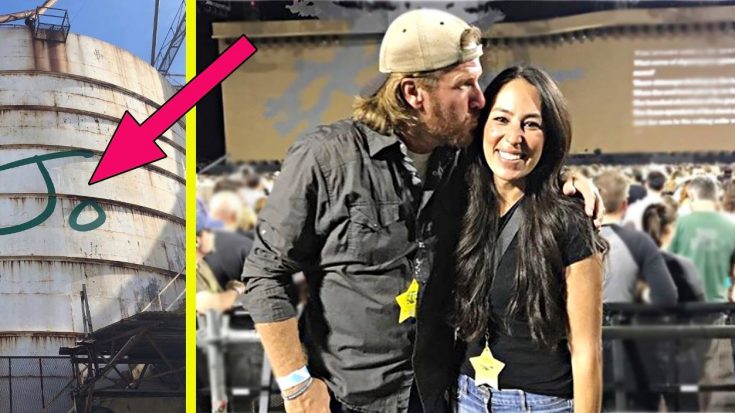 It’s no question that Chip and Joanna Gaines have lots of love for one another and this Valentine’s Day – the Fixer Upper star shared his love in a big way.

Chip and Joanna’s love story began when they met back in 2001 at her dad’s shop in Waco, Texas. Just two short years later, the couple tied the knot in a beautiful summer wedding. Not long after the big day, the couple joined forces and became the powerhouse design team they are to date. After 15 years of marriage and five kiddos later, this dynamic duo is still running strong!

It's been a good fifteen years @chipgaines ❤️ Here's to fifty more…

In-between flipping houses and dirty diapers, these two are still finding ways to keep the spark alive. From trading in their usual date night for a wild ride by seeing U2 live in concert to flying out to Italy for a romantic getaway that was well-deserved, this couple has no problem finding ways to have fun. And of course – we can’t forget their carpool karaoke sessions.

We both slept for 15 hours and missed breakfast, lunch, and an afternoon of shopping with friends, but that rest felt good! Florence, you're beautiful ❤️

But this act of love was more unexpected than most. In honor of Valentine’s Day, Chip went above and beyond to impress his long-time love. Chip posted a photo of a silo in Magnolia Market where he spray painted a sweet note for his wife to admire – “Chip [hearts] Jo.”

With a thoughtful caption, he wrote,

Chip was referencing the classic Joe Diffie song, “John Deere Green.” The song tells the story of a boy named Billy Bob who did a similar gesture for his high school sweetheart.

“In John Deere green, on a hot summer night. He wrote ‘Billy Bob loves Charlene’ in letters three-foot high. And the whole town said that he should have used red but it looked good to Charlene, in John Deere green.”

Chip brought Diffie’s 1993 classic love story to life with his own love note and fans everywhere are gushing!