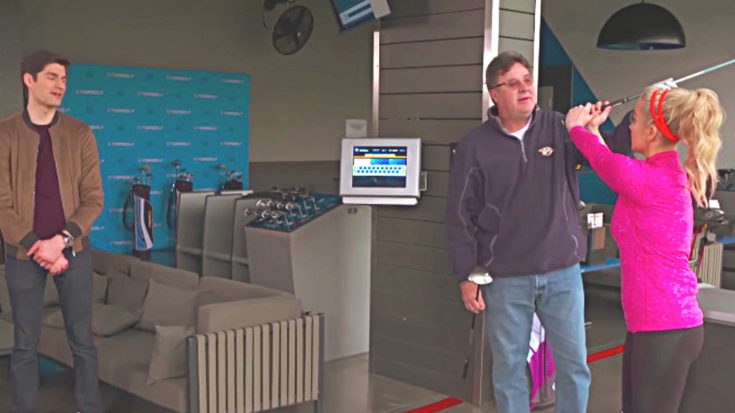 Today, Vince Gill is one of the most iconic country stars in all of history. But years ago, when singing country music for a living was just a dream, Gill was working his first job picking up stray golf balls on a golf course.

While Gill went on to achieve his musical dreams, he never lost his passion for golfing. He continues to golf on a regular basis today, and has played on courses all over the world.

So when Kellie Pickler and Ben Aaron of the talk show Pickler & Ben decided to go to Top Golf in Nashville, Gill seemed like the perfect country star for them to meet up with.

Kellie Joins Vince For Golf Lesson: This Was A Bad Idea…

As a pretty seasoned golfer, Gill was curious to see how Pickler and Aaron would do. He had no idea what he was in store for!

Aaron and Gill encouraged Pickler to go first, and she was excited to meet the challenge. But she instantly caused Gill to become concerned when he saw her choice of footwear…platform sneakers.

“I got ten bucks says she breaks both ankles in them shoes,” Gill said as Pickler stepped up to the tee. We can’t blame him for thinking that, because she did seem a bit shaky in those tall shoes!

Much to Gill’s surprise, she ended up proving him wrong and actually scored a few impressive hits before she let Aaron take over.

Get Ready To Giggle Over Kellie’s (Lack Of) Golfing Skills

Once Gill stepped up to the tee and hit a few balls, Pickler had some sort of realization. “So that’s what it’s supposed to look like?” she asked with excitement.

Anxious to mimic Gill’s expert form, Pickler teed up again and got ready to show off her new skills. But even though she had done alright earlier, Aaron and Gill couldn’t help but be concerned as they watched her horribly fail at figuring out how far back she should swing the club

“Why does your face look so worried?” Pickler asked her co-host, who was standing behind Gill for protection.

Of course, that upset Pickler, prompting her to say “You’re using Vince Gill as a shield?”

It turns out that Aaron didn’t have any reason to seek protection, because Pickler ended up hitting the ball just fine. Still, that didn’t stop him from hiding behind a pillow when she teed up a little later.

Everything about Pickler and Aaron’s outing with Gill was pure chaos, but it’s comical chaos! Go ahead and watch the video of their golf day below.

If you need a good laugh today, this is sure to give you one!