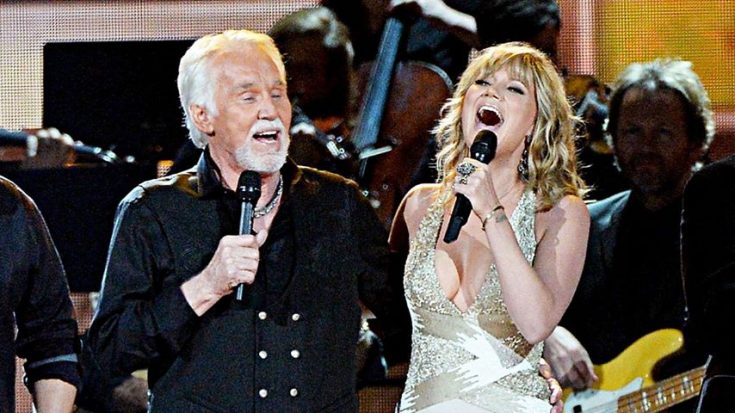 This “Islands In The Stream”  duo will make you do a double take! Normally, when we think of the hit song – we think of superstar Dolly Parton standing across from the legendary Kenny Rogers as they sing their hearts out on stage. Well, not this time – and we are actually okay with it.

Written by the Bee Gees, the song got a country twist when the legends sang it and became an instant hit. It even reached the top of Billboard’s Hot 100! The two went on to perform the beautiful song countless times – but this time Dolly wasn’t part of the famous duo.

You always need a good friend to lift you up, tell you the truth and if you're lucky, sing a song with! I can always count on my dear friend @_Kennyrogers to make me smile, and I want to wish him a very happy birthday today! We'll always be islands in the stream! 🎂 ❤️

At the 2013 CMA Awards, Rogers was awarded the Willie Nelson Lifetime Achievement Award and wanted to bring back one of his classics. Nobody deserved the award that evening more than the highly-decorated Kenny Rogers. Inducted into the Country Music Hall of Fame in a Medallion Ceremony in late 2013, Rogers was celebrating a five-decade-long career.

He sold more than 120 million records worldwide, recorded 24 No. 1 songs and 12 No. 1 albums, released 39 studio albums, and 22 Top 10 Country albums. Rogers retired in 2015 as one of the best-selling music artists of all time.

Rogers wanted to celebrate the evening with the famous duet but unfortunately, Dolly was not able to help him out this time. So he called on Sugarland front-woman, Jennifer Nettles to stand in for the 1983 hit – and she absolutely nailed it.

While Dolly was unable to attend the event due to an auto accident injury, she’s now in better health and back at it! And Dolly was definitely impressed by Nettles’ rendition of the song.  Heck, she even recruited Nettles for her own duet of “Circle of Love” in 2016!

Nettles made the iconic country star proud with her soaring vocals and ever-present smile – but what did you think of the rollicking duet?
Let us know in the comments below!