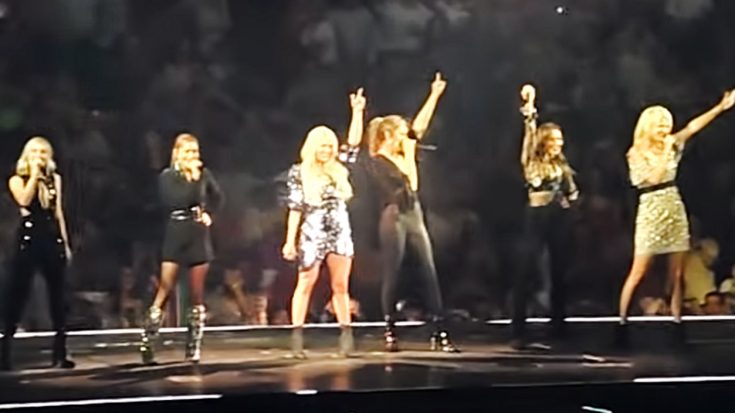 Carrie Underwood and her girl-power line up of openers put on a surprise classic country medley that had fans jumping out of their seats.

Underwood kicked off her 2019 Cry Pretty Tour 360 with a whirlwind of successful shows. The powerhouse singer brought along duo Maddie & Tae as well as girl band, Runaway June. While the fierce lineup had fans eager to see what surprise the acts had in store – they did not disappoint.

At her May 3, 2020, show in Birmingham, Alabama, one fan captured the incredible moment that Underwood brought out both Maddie & Tae and Runaway June for the classic country medley of a lifetime. Underwood began by taking center stage to sing Tammy Wynette’s “Stand By Your Man.” As she stunned the audience with her rendition, Runaway June slowly came onto the stage to sing Patsy Cline’s “Walkin’ After Midnight.” A few moments later, Maddie & Tae appeared on stage to sing the second verse, providing gorgeous harmonies to the classic hit.

Of course, it wouldn’t be a country medley without a little Loretta Lynn and that’s what the six ladies dived into next. Underwood starting off with “Coal Miners Daughter” before the duo and band joined in behind. Directly following, they jumped into Dolly Parton’s “9 to 5” where the entire audience was singing along for the upbeat tune.

Maddie & Tae also took on The Judd’s “Rockin’ with the Rhythm of the Rain” with harmonies from Runaway June. Underwood and the groups then joined on center stage, standing side by side to sing Trisha Yearwood’s “She’s In Love With the Boy” before roaring into Martina McBride’s “Independence Day.”

To finish out the powerful tribute to the many women who built country music, they sang Faith Hill’s “Wild One” and a sassy version of Reba McEntire’s “Why Haven’t I Heard From You.”

In true girl power fashion, they closed out the medley with Shania Twain’s “Man! I Feel Like A Woman.”

Prepare to have this performance on repeat for weeks. We can’t get enough!