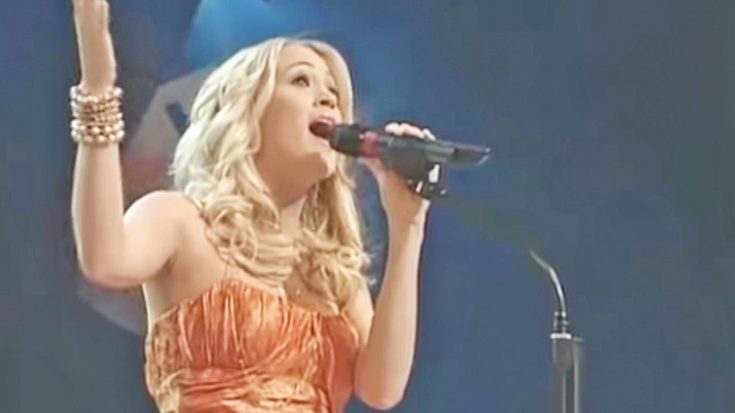 Country music sweetheart Carrie Underwood dazzled with a stunning performance of legend Tammy Wynette’s “Stand By Your Man” on stage at the Grand Ole Opry back in May of 2008.

Underwood captivated the audience with a combination of her strong vocals and commanding stage presence. While nothing may ever compare to the “First Lady of Country’s” original stylings, Underwood without a doubt does the song the justice it deserves.

Born on this day in 1942 in Tremont, Mississippi, the First Lady of Country Music, Tammy Wynette, famous for 'Stand By Your Man'. pic.twitter.com/gxjsqqpUq3

“Stand by your man, give him two arms to cling to,” sings the country star. “And something warm to come to when nights are cold and lonely.”

“Stand By Your Man” received slight criticism after its original release in 1975 when people accused Wynette of encouraging women to place themselves second to men. However the country singer assured that is their own misinterpretation of the love ballad and that the song is simply a suggestion for women to overlook their husbands shortcomings if they truly love them.

The country classic rose to No.1 on Billboard’s Hot Country Singles chart and No.19 on the all genre Hot 100 chart. The Library of Congress selected the song in 2010 to be included into the National Recording Registry for being “culturally, historically, or aesthetically significant.”

Watch Carrie Underwood’s tribute to the late and great Tammy Wynette in the video below and be sure to let us know what you think in the comments!