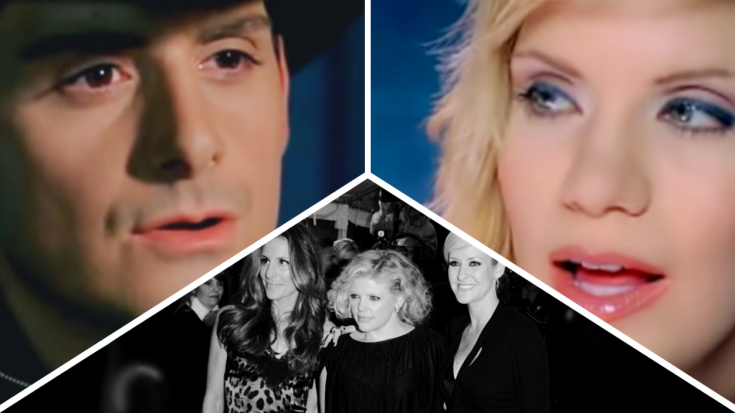 One Of Country Music’s Greatest Duets

Brad Paisley & Alison Krauss‘ “Whiskey Lullaby” is both one of the saddest and one of the greatest songs to ever grace country music. Full of heartache and sorrow, the song has the singers narrating the tragic story of two people who fall apart after ending their relationship.

In the end, both the man and woman take their own lives, and are eventually buried next to each other with the angels singing a “whiskey lullaby” for them.

While Paisley and Krauss were the ones who brought the song’s devastating tale to life, another duo was responsible for writing the story in the first place. That credit goes to Bill Anderson and Jon Randall, whose work was honored with the 2005 CMA Award for Song of the Year.

How The Song Sparked

In a 2014 interview with The Tennessean, Anderson explained how the song came to be. As it turns out, it was inspired by some rough times Randall was going through following his divorce from country star Lorrie Morgan.

Anderson recalled how Randall had been drinking a lot after his divorce, and ended up crashing on a friend’s couch one night. When he woke up, his friend said something that inspired him to suggest a line during a songwriting session with Anderson:

“As I was coming to, I was apologizing to my friend. I said, ‘I know I’ve been an inconvenience to you. I’ve been an intruder, really, in your life and your home. I thank you.'” Then his friend responded, “‘That’s all right Jon. I’ve put the bottle to my head and pulled the trigger a few times myself.'”

You now know those words took hold as the first line in the chorus to “Whiskey Lullaby.”

If Whiskey Lullaby doesn’t give you chills just a little, do you even have a heart?

Taking the line Randall suggested along with an idea Anderson had about a burning “midnight cigarette” representing a fading love, the duo wrote a song. And “Whiskey Lullaby” was born.

Hope In A Hold

That was in 2000. Even though the song was clearly well-written, no one jumped at the chance to record it. Anderson felt it was because it was too depressing. “It wasn’t exactly like people were running up and down Music Row looking for double suicide drinking songs,” he said.

Finally, the two heard the news every songwriter dreams of getting…the track had been placed on hold. But not by Paisley or Krauss.

Instead, it was claimed by The Chicks.

To Anderson, it made perfect sense why the all-female trio was interested in the song. “They would be the kind of act, and at that time, they would have gone outside the lines and colored a little bit,” he said.

Brad Wanted It, So He Waited

The trio maintained their hold on the song for three years. During that time, Paisley was introduced to the track, and made it clear he wanted to record it if the Chicks ever released their hold.

“Brad said, “Can I put a secondary hold on it?‘” Anderson remembered. “I thought, “Yeah, secondary hold, sure. It’ll get recorded [by the Chicks].”

But it didn’t, and there’s a big reason why. That reason was the fallout that took place after the trio publicly criticized then-President George W. Bush during a concert in London.

With all the backlash and the future of their career seeming uncertain, the Chicks finally released their three-year hold on “Whiskey Lullaby.” Paisley now had the primary hold, and wasted no time in claiming the song for himself.

An Idea That Came To Life

He approached Anderson with an idea…what would he think about adding a female singer to the track to make it a duet?

“I said, ‘Wow, that’s a pretty cool idea. Who are you thinking about?‘” Anderson said. “He said, ‘There’s only two people I think that could do it. Either Alison Krauss or Dolly Parton.‘”

Paisley later recorded another duet, “When I Get Where I’m Going,” with Parton.

It was Krauss who joined him on “Whiskey Lullaby.” The result was a Top 10 hit that has since been certified double platinum.

For three years, Paisley waited, hoping that the Chicks would one day lift their hold on a song with a story he wanted to share. When that day finally came, he had a clear vision for how to best bring Anderson and Randall’s beautiful words to life.

He made that vision into a reality, and that reality became one of the most widely respected country songs to ever exist.

The history behind “Whiskey Lullaby” is undoubtedly complicated, but as you know, the payoff was more than worth it.