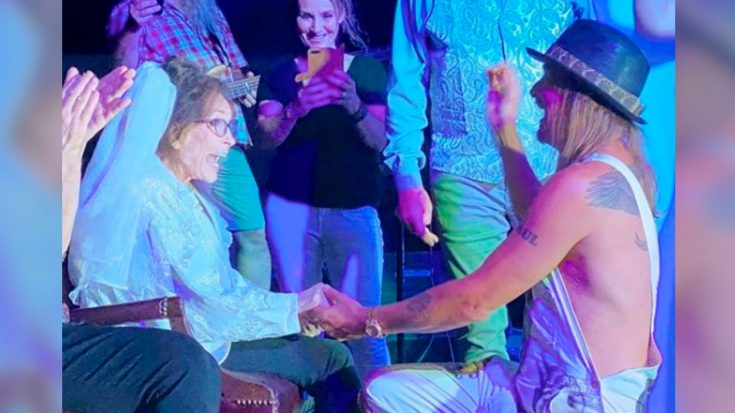 She said the theme of the night was “‘HILLBILLY SOIRÉE w/an elegant flair.‘”

Loretta knew she couldn’t miss the event, so she was in attendance. Kid Rock was there as well, and he was getting ready to sing a song “when BAM a preacher walks out on stage,” Tayla recalled.

Tayla said her dad and stepmom arranged a pretend wedding ceremony between Kid Rock and Loretta to make her feel special. The two singers were good friends:

“Like they adore each other,” Tayla explained. “They joke around all the time about getting married and saying to heck with the rest of em. So Dad and Crystal decide to make that happen!“

Tayla said both Loretta and Kid Rock were “caught off guard” by the whole thing, but were still incredibly thrilled about their pretend marriage ceremony.

She shared some pictures of the pretend ceremony, as well as a few pictures from her dad’s vow renewal.

This weekend I had the pleasure of helping my Dad and StepMom plan their VOW RENEWAL. ❤️ They hosted a “HILLBILLY SOIRÉE w/an elegant flair” ??‍???‍? Crystal worked so hard making sure that everyone would have a great time. She was selfless in making it about her friends and family. She had a delicious caterer, Ronnie Qs out of Dickson. A local bakery did the cake. Uncle Murray’s w/Currier on design. Unc aka Tim Cobb on set design. Melinda Proctor on photos. Aunt Peggy with the gorgeous flowers ? and obviously the AMAZING TIM WATSON BAND! ? She and Dad even took a moment that was theirs and did something special for Memaw. As they finished their dance to “Look at Us”, Having their bestie, Kid Rock, come out to officiate the ceremony and saying their vows to each other they turned the attention to my grandmother. Bob (Kid Rock) was about to sing a song when BAM ? a preacher walks out on stage. (Insert our bestie Anthony Sims) They turn the lights to Kid and Memaw. Now you must understand how close Kid and Memaw have gotten. Like they adore each other. They joke around all the time about getting married and saying to heck with the rest of em. So Dad and Crystal decide to make that happen! They have the preacher announce that he’s ready to do the vows now! Memaw and Kid both become giddy. Like school kids. They were so caught off guard but both so happy ? They played along. (Cause obv it’s a joke) Unc (Tim Cobb) even had the veil ready ❤️ We all Laughed, sang, hugged. It was a moment last night in the midst of the world turning sideways where love and joy were absolutely shared. I honor my Daddy and Crystal today. To their love, their devotion and their long lives together. Thank you so much for loving our family. ❤️ ***to the people. I didn’t realize I was putting myself right in the midst of all the pics of them. Sorry not sorry? I’m glad I was there. I do feel a little weird being sandwiched in between. Hopefully the real photographer got some shots and can edit me out Crystal hahaha. #CrystalLynn #LorettaLynn #Ronnie'sQBBQ #UncleMurraysCupcakes #kidrock #ernielynn #taylalynn

Of course, the ceremony wasn’t real, and Loretta didn’t actually marry Kid Rock. But Tayla said “They played along” and ended up enjoying themselves.

It’s clear Loretta had a good time, because she posted about her pretend marriage on her own Instagram account. She shared some pictures too, and a few pictures show her wearing a veil:

“Things got crazy then–my boy @kidrock was there and we’ve always teased about getting ourselves married. Well, the preacher was already there so we had some fun with it. Sorry girls, he’s taken now!” Loretta wrote.

She also included a few funny hashtags, including “#cougar” and “#88andfeelinggreat.”

What a weekend! My Ernie & Crystal renewed their vows this weekend. It was beautiful and everything it should be. Marriage isn't always easy–heck it's not even always pretty, but love holds you together and you push through the bad days to enjoy the good ones. I'm so proud of them and wish them years of happiness. Things got crazy then–my boy @kidrock was there and we've always teased about getting ourselves married. Well, the preacher was already there so we had some fun with it. Sorry girls, he's taken now! #gottahavesomefun #88andfeelinggreat #laugh #tabloidfodder #cougar @lorettalynnranchofficial

Loretta passed away just a little over two years later, on October 4, 2022. Kid Rock wrote a heartfelt tribute to her, saying:

“RIP Miss Loretta. I find it very difficult to put your beautiful soul, talent and friendship into words right now… so I will use the ones you said to me and so many others, so many times…’I love you honey’ Kid Rock.”