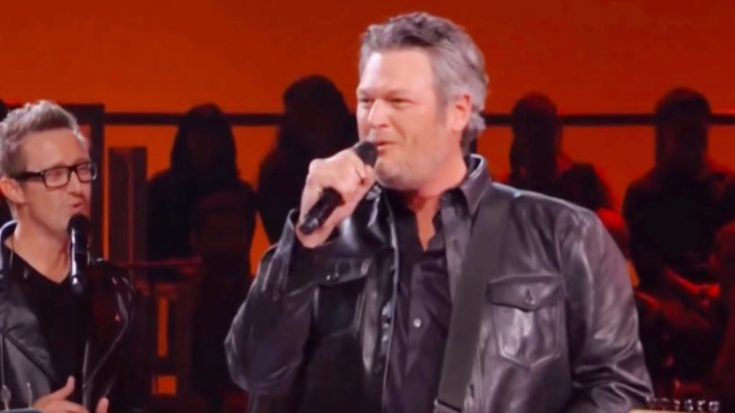 If you ever needed concrete evidence to prove how Elvis Presley influenced the music industry, you need look no further than the television special hosted in his honor on February 17, 2019.

Artists of all genres gathered to celebrate “The King,” including big names such as Ed Sheeran, Jennifer Lopez, and new Voice coach John Legend.

NBC’s #ElvisPresley tribute to celebrate the 50th anniversary of the ’68 comeback special, will see Ed Sheeran, Jennifer Lopez and many others, perform Elvis classics, and it’s airing tonight!https://t.co/XZ4QS8HC6A

As you would expect, many country artists were also involved, including Carrie Underwood, Darius Rucker, and Keith Urban. The greatest responsibility of the night was given to Blake Shelton, who served as the special’s host.

In addition to hosting the show, Shelton also performed. He joined an all-star cast in delivering the the brilliant finale performance of Presley’s “If I Can Dream.”

Other than the finale, Shelton also sang Presley’s “Trouble,” “Guitar Man,” and a medley of hits, including “Blue Suede Shoes,” “Don’t Be Cruel,” and “Thats Alright.”

A Cover With Deep Country Roots

But as stellar as all of those moments were, Shelton’s true show-stopper moment was when he sang “Suspicious Minds.”

“Suspicious Minds” is a track that the country music community knows well. After the song was a hit for Presley, a number of country artists went on to record their own renditions. One of the most successful recordings came from Waylon Jennings and Jessi Colter, whose duet version of the song reached the second position on the Hot Country Songs chart.

The song was also famously covered in 1992 by Dwight Yoakam, who experienced chart success with it as well. His rendition climbed as high as the 35th spot on the Hot Country Songs chart.

So How Did Blake Do?

We’re sure Shelton made Stefani proud with his performance of the song, which was a highlight of the night.

Standing on a small stage in the middle of the audience, Shelton crooned the lyrics of the oh-so-familiar song while background singers chipped in to offer up its signature harmony parts. The result was a slow, smooth jam that surely captivated the minds of everyone watching.

After watching Shelton perform “Suspicious Minds,” we kind of hope he’ll think of recording it for an album some day. His voice is the perfect fit for it, wouldn’t y’all agree?

Give it a listen below and see if you do!