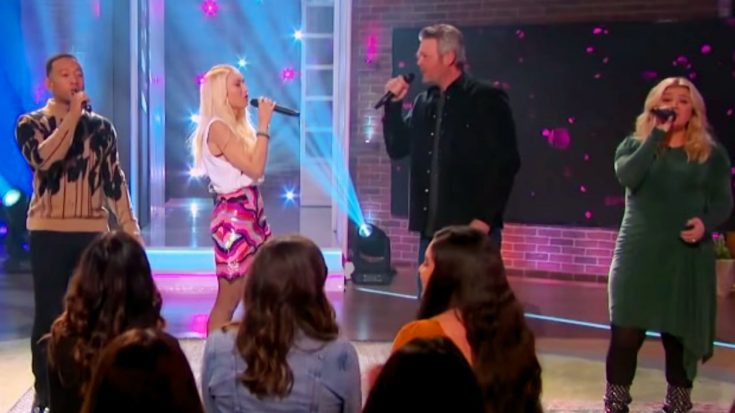 Before The Voice‘s 17th season kicked off, coaches Blake Shelton, Gwen Stefani, John Legend, and Kelly Clarkson united with host Carson Daly for a performance. The group sang the 90s hit “More Than Words,” which was released by the rock band Extreme.

The performance was an intimate one, and the coaches had minimal instrumental backup.

That performance made it clear how well the four coaches work together. So when Shelton, Stefani, and Legend all stopped by to visit The Kelly Clarkson Show, they decided to orchestrate another collaboration.

This time the group opted to sing one of country music’s most iconic songs…”Neon Moon” by Brooks & Dunn.

Brooks & Dunn released “Neon Moon” in 1991 as a single off of their debut album Brand New Man. The song went on to top the country charts in both the U.S. and Canada following its release.

Recently, the duo remade the song for their album Reboot, which features reworked versions of their biggest hits. Kacey Musgraves joined them for “Neon Moon,” and the recording earned a wealth of praise.

The Voice coaches’ rendition of “Neon Moon” is also deserving of compliments. The quartet performed the song as part of the “Kellyoke” segment of The Kelly Clarkson Show, during which Clarkson puts her own spin on other artists’ songs.

Since it was her show, Clarkson was the one who opened the performance. One by one, the other coaches joined in, starting with Shelton, then Stefani, and finally, Legend.

Each coach got the chance to sing solo for a little while before they all united and sang together. Daly strolled out on stage to join them mid-performance, and played guitar while they continued to sing.

The coaches’ rendition of “Neon Moon” was as enchanting as could be, so make sure to check it out in the clip below. We hope to see the four of them collaborate with each other again in the future!