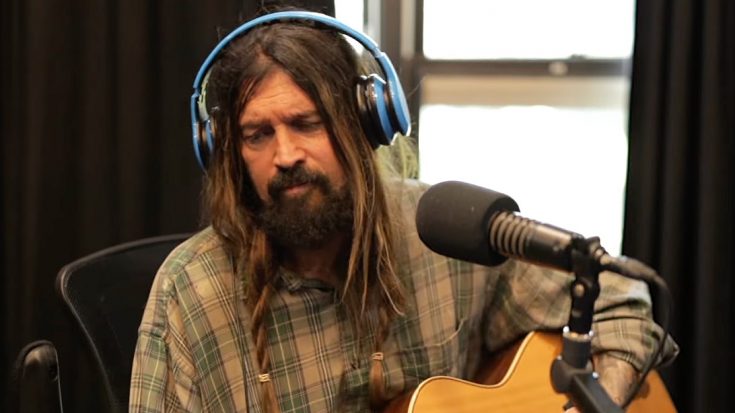 Billy Ray Cyrus was one of the biggest country music stars to come out of the ’90s. With hits like “Achy Breaky Heart” and “Some Gave All,” Cyrus garnered a massive following, but his celebrity wasn’t all that it seemed to be.

In a new podcast interview with Bobby Bones, Cyrus spoke out, for what he thinks is possibly the first time ever, about his addictions during the early part of his career. While Billy Ray was writing some of the best songs of his career, those songs came about due to some intense personal struggles.

“I think it was an excess of alcohol. There was probably some…I hate to even say it…It was a pretty rough time,” Cyrus recalled. “Excessive alcohol. I’ll just leave it at that.”

When asked by Bobby if he knew that his drinking was a problem or if he was just partying too hard, Cyrus said it was just part of his job.

“I always had a rule. I said I’d go play the first set completely straight…In between the break I might take a little puff,” Cyrus said. “That’s probably the best set of the night. By the third set I’d have a puff possibly, unfortunately maybe a snort.”

Then came drinks, often sent to him by fans. “By the fourth set I was legally drunk.”

Billy Ray went on to share that Keith Whitley’s untimely death in 1989 had a profound impact on his life. Cyrus and Whitley shared a manager and the “Achy Breaky Heart” singer traveled from his home in West Virginia to Nashville to attend a meeting at Sony Records with his manager. But, Whitley would die of alcohol poisoning that same day.

“The meeting was canceled, obviously. And I drove back home to Huntington, West Virginia, and played ‘I’m No Stranger To The Rain’ over and over and over…I bet I played it 100 times between here and Huntington. It just had a huge impact on me,” Billy Ray said. “Luckily in 1991 when I realized that ‘Hey, Cyrus, you’re about to get your chance. You got the album that everybody seems to really believe in,’ I stopped at a bridge down here at the Harpeth somewhere and threw all my stuff into the river. And said ‘I can’t do this and not be at my very best. I’ve worked too hard.'”

When asked by Bobby Bones to specify what “stuff” he threw in the river, Cyrus said it was cocaine. “I pulled over and threw my cocaine out.”

Billy Ray added that he stopped nearly everything that day, including alcohol and hasn’t had a drink since. But, allows himself “a little puff every now and then of marijuana.”

“I kind of allowed myself to say, ‘Okay, if you get rid of these two devils…alcohol and cocaine…keep a little bit of the marijuana because it’s kind of your medicine,'” Cyrus admitted.

Not only did Billy Ray Cyrus quit alcohol and cocaine cold turkey, but he now runs from it, saying he doesn’t want it around him. “I don’t ever want to be tempted by it because it never goes away.”