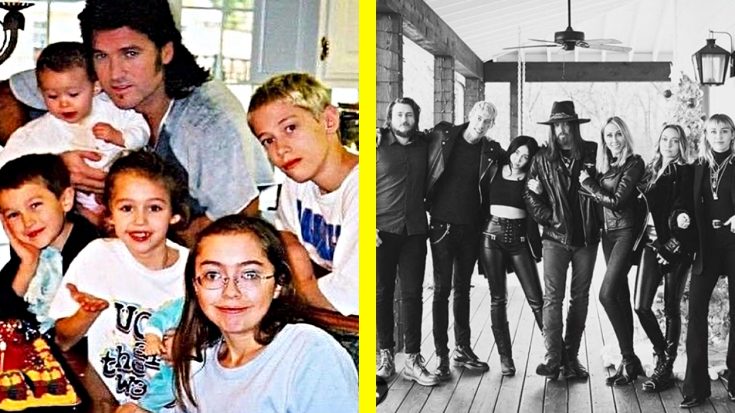 Most people know Billy Ray Cyrus as a popular 90s country artist, his 1992 hit “Achy Breaky Heart,” and for being the father of pop star and former teen idol Miley Cyrus.

What many people don’t know is Billy Ray has six children in all, and most of them have followed in their father’s footsteps and pursued careers in the music industry.

Get to know Billy Ray’s six talented children below!

Christopher Cody Cyrus was born in April 1992. His mom, Kristin Luckey, and Billy Ray had a brief relationship in the months prior to Billy Ray meeting Tish Cyrus. In a 2009 interview with Mirror, Christopher revealed his mom and step-dad primarily raised him, and he rarely saw or had much of a relationship with the rest of the Cyrus clan.

Miley Ray Cyrus, named Destiny Hope at birth, was born in November 1992. She became an overnight teen idol with her hit series on the Disney Channel, Hannah Montana. The show aired from 2006 to 2011. She continued her music and acting career as a hit-producing pop singer and starring in a variety of shows and movies, including the reality talent show, The Voice, and the 2010 movie, The Last Song.

Braison Chance Cyrus was born two years after Miley in May 1994. He acted in the 2016 movie Heels and television shows, Doc and Billy Ray Cyrus: Home at Last.  Like the rest of his talented family, he also dabbles in music and debuted the single “I’ll Never Leave You” in December 2018.

Noah Lindsey Cyrus was born in January 2000 and is the baby of the Cyrus family. In 2016, Noah made her debut in music with her single “Make Me (Cry)” and was nominated for Best Breakup Song at the 2017 Radio Disney Awards. She was also named one of Time’s 30 Most Influential Teens that same year.

Trace Dempsey Cyrus was born Neil Timothy Helson in February 1989. Trace is Tish’s son from a previous marriage. However, he was adopted by Billy Ray as a young child and his name was legally changed.

He is a musician like most of the Cyrus family, as the lead singer and guitarist of the bands Metro Station and Ashland HIGH.

Brandi Cyrus is the daughter of Tish Cyrus from a previous marriage, but once Tish and Billy Ray married, he adopted both Brandi and her brother, Trace.

Like her parents and siblings, she has dabbled in all aspects of the entertainment world. She is considered an actress, singer, DJ, and TV show host. Her most recent gigs are the podcast, Your Favorite Things, with former Bachelorette contestant Wells Adams and as a co-host with her mom on the Bravo show Cyrus vs. Cyrus: Design and Conquer.

Watch the Cyrus clan perform some carpool karaoke in the video below!