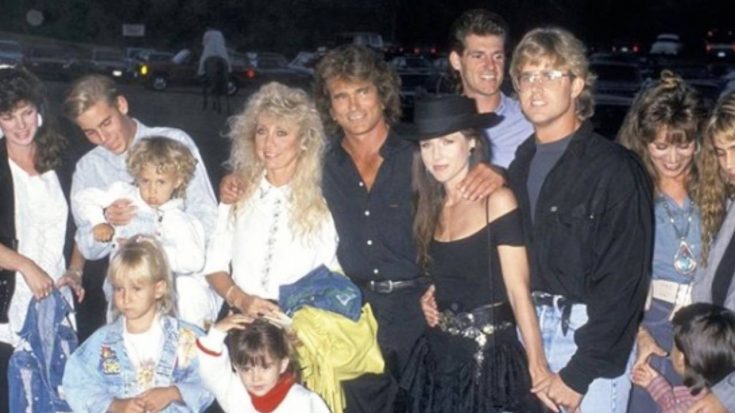 He is such a legend in the television world that only one person graced the cover of TV Guide more times than him – Lucille Ball. Now that’s good company!

Throughout his life, Landon was married three times and had nine children.

He married his first wife Dodie Levy-Fraser in 1956. Michael adopted Dodie’s son from her previous relationship, Mark, and they adopted a son, Josh, together before divorcing in 1962.

Before he and Dodie broke up though, she wanted to adopt another child. According to Michael’s longtime publicist Harry Flynn, he said, “Michael was not in favor of bringing another baby into a home where he wasn’t that happy anyway.” In May 1961, a one-week-old baby named Jason officially became a Landon.

In 1962, Michael was quoted as saying, “I hate it when someone calls [Josh and Jason] ‘adopted’…. They’re my sons—period. Not my ‘adopted sons.’ They’re my sons, and I’m their father until they die—or I die.”

However, when he and Dodie divorced 10 months later, she got custody of all three children and eventually rehomed Jason to a couple in Texas, unable to care for all three boys by herself. Michael never talked about the situation, but according to record producer and close friend Nik Venet, that reason is because “he didn’t have a clue how to handle it, but he knew an awful lot about Jason. It would be hard to prove, but I think someone was contacting him. Michael had a conscience about the boy, and an affection for him. He just wanted to make sure the kid was okay.”

Jason eventually found out about his early life years later and told People in 1991 after Michael’s passing that he attempted to get to know him the year before. Not much more is known about him.

She had a daughter, Cheryl, from her first marriage but she was raised by Michael. They had four children together – Leslie, Michael Jr., Shawna, and Christopher. He and Marjorie split in 1982 and a year later he married Cindy Clerico, a makeup artist on Little House on the Prairie.

Michael and Cindy had two children together, Jennifer and Sean. His youngest was just five years old when he passed away from an aggressive form of pancreatic cancer. Several of his children followed in his footsteps and you may have seen them on your television screen!

Michael married Dodie Levy-Fraser when he was just 20 years old and immediately adopted her son Mark, who was eight years old at the time.

Mark followed in his father’s footsteps and pursued acting, landing a roles in Double Edge in 1986, the 1991 TV movie Us alongside his father, and 1997’s Goodbye America. Mark passed away at the age of 60 in 2009 and was buried in the same room as his dad at the Hillside Memorial Park Cemetery in Culver City, California.

Michael and Dodie adopted Josh when he was an infant. Though not much is known about what Josh is up to these days, we do know Michael loved him very much and was so proud of him.

Cheryl was nine years old when Lynn and Michael were married, but Michael raised her as his own and she even took his last name. Cheryl wrote a book about her life as the TV legend’s eldest daughter titled I Promised my Dad.

If you are a fan of Little House on the Prairie, you likely already know Leslie. She played Etta Plum on the series from 1982-1984, as well as other guest appearance in the 70s.

A post shared by My LHOTP Rememberance Book (@mylhotp)

Leslie got out of show business and attended Pepperdine University where she got a BA in psychology and an MA in clinical psychology. She got her Ph.D. in marriage and family therapy from the California Graduate Institute. She now works as a clinical psychologist.

Leslie married Brian Matthews and they have two children.

Their daughter, Rachel, is an actress and made her film debut in Happy Death Day, which was directed by Christopher Landon, her uncle. She also voiced Honeymaren in the film Frozen 2.

Michael Jr. is a producer and director, working on projects including When Calls the Heart, Love Comes Softly, and Jamaa.

He has been married to his wife Sharee Gregory since December 19, 1987. They have three children – daughters Ashley and Brittany and son Austin.

Unlike some of her siblings, Shawna stayed out of show business, though she did have two uncredited appearances in Little House on the Prairie in 1979 and 1983.

Shawna is now a real estate agent in Los Angeles with a son and two daughters of her own.

The youngest of Michael’s children with Lynn, Christopher was just four years old when their parents divorced. He lived with his father until he was sixteen, when Michael passed away.

Chris is happily married to his husband, Cody, and they have two children together.

Michael’s youngest daughter, Jennifer might be his most famous child, thanks to her latest role as the character Teeter on the hit TV show Yellowstone.

Before she was playing the tobacco-chewing female ranch hand on the Paramount Network series, she starred on the CBS soap opera As The World Turns and won three Daytime Emmys for her portrayal of Gwen Norbeck Munson. She even worked with her father twice – once on the series finale of Highway to Heaven when she was five years old and on the TV movie Us, which was actually filmed as a pilot to a TV series, but Michael passed away before more episodes came to fruition.

Michael’s youngest child, Sean, was just a young boy when his father passed, but he still remembers him fondly, according to his social media posts.

On July 1, 2020, he wrote, “29 years ago today you passed away. I am beyond grateful for the time we had together and the impact you made in my life and the lives of many others. Until we meet again. I love you forever.“

29 years ago today you passed away. I am beyond grateful for the time we had together and the impact you made in my life and the lives of many others. Until we meet again. I love you forever.

Sean is now in his mid-thirties, is a successful Realtor, and runs his own company, Sean Landon Estates.

Michael passed away before all his children became adults, but we know he’s looking down on them, prouder than ever.