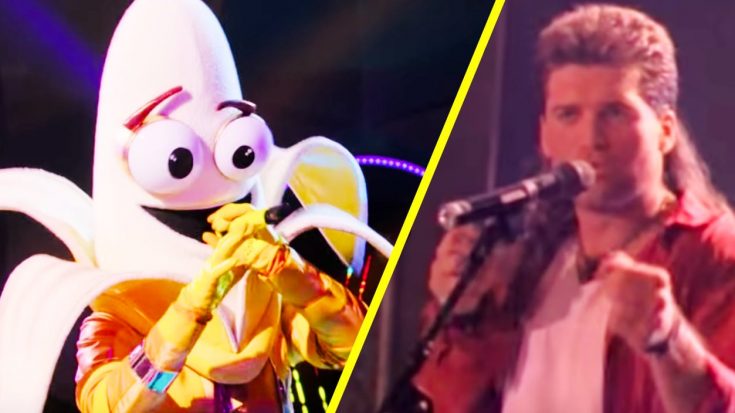 The Masked Singer went a little country for one episode of its third season!

Not one, but two contestants performed songs with country roots in the same episode. The fan-favorite Kitty wowed everyone with her rendition of Brett Young’s “Mercy,” which was released in 2017.

Another contestant picked a 90s country hit that went on to become one of the defining songs of the decade. The song we’re talking about is “Achy Breaky Heart,” recorded by Billy Ray Cyrus.

Cyrus had a bit of beginner’s luck with “Achy Breaky Heart,” since it was both his debut single and first number one hit. The song was also a crossover success, and claimed the fourth spot on the all-genre Billboard Hot 100 chart.

“Achy Breaky Heart” is still a showstopper today, so the Banana made a wise choice when he picked it to perform on The Masked Singer.

However, it seems the pressure of the competition got to the fruit-wearing singer, because he missed the intro and forgot some of the lyrics later in the song. Despite this, he put on an entertaining performance that charmed the judges.

In the end, Banana was cleared to sing another day. His mistakes were forgiven, and it was the Mouse who got unmasked that night.

Tune in to the video below to see the Banana sing “Achy Breaky Heart.”

It’s easy to understand why the Masked Singer judges chose to keep the Banana around. He seems like a good showman, making us curious to know who’s under the mask!