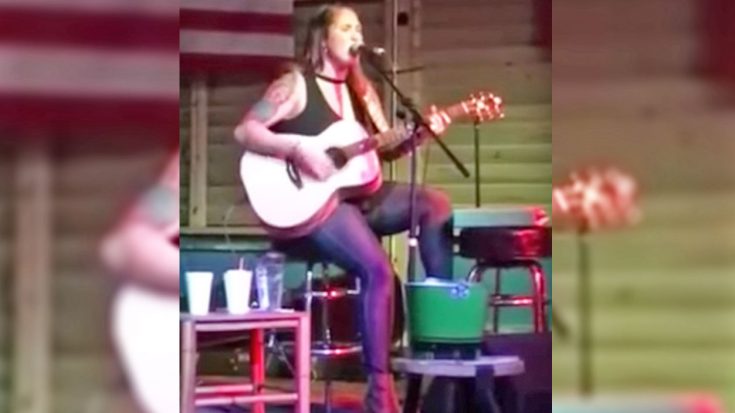 It’s no doubt that talent runs in the Brooks’ blood. Country music icon, Garth Brooks has been gracing fans with unforgettable hits for decades and it looks like one of his daughters is following in his footsteps. Allie Brooks, who goes by Allie Colleen, has been showcasing her beautiful vocals for a couple years now. Luckily for us, one Nashville local caught Allie performing one of her most beautiful covers.

Garth is the father of three beautiful daughters, Taylor, August, and Allie. 23-year-old Allie has been on the road to music since she was young. While attending Belmont University in Nashville, she studied music prompting her love for singing and songwriting. Although she knew her passion early on, she made a promise to her dad that she would graduate before pursuing her musical career.

In May 2019 she fulfilled that promise. Since graduating, Allie has been trailblazing through the music world eager to find her own place in the industry.

Allie has released a few of her own original songs that she plays at her live performances as well as country classics.

While Allie frequently performs at Scoreboard in Nashville, she graced the audience with her rendition of “Travelin’ Soldier” by The Dixie Chicks. The heartbreaking 2002 single was the band’s sixth single to reach No. 1 on the charts. Released off their album Home, it would be one of the Dixie Chicks’ last No. 1 hit singles.

Sitting on a stool in the popular Nashville bar, Allie began strumming her guitar to the soulful song. Singing with a similar twang to her father, Allie quickly stole the audience’s attention. Members of the crowd are heard singing along as well as clapping and cheering the young Brooks on. As she effortlessly performs the song, it’s clear that she shares the same passion in music as her father.

As she finishes her performance, her contagious smile resonates across the venue. We can’t wait to see what other amazing shows Allie has up her sleeve this year!

Watch Allie Colleen perform the most stunning rendition of “Travelin’ Soldier” below.