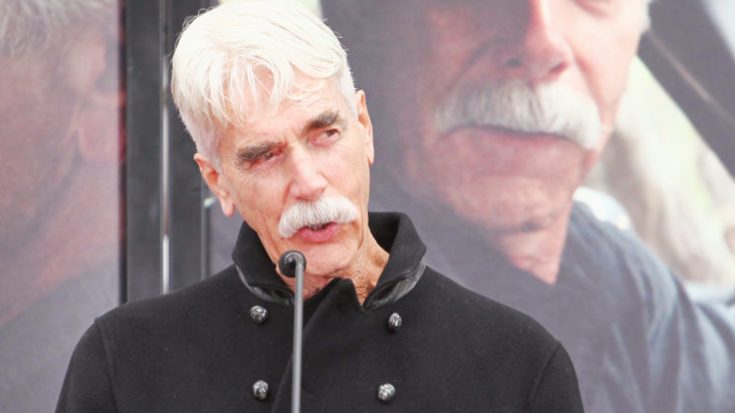 Actor Sam Elliott has generated a great deal of respect during his decades-long career in Hollywood. Over the years, the famously Western-cast actor has earned a number of accolades, having earned nominations at the Golden Globes and the Emmys, to name a few.

Another major milestone Elliot reached was being asked to place his hand and feet impressions in front of the famous Chinese Theater in Hollywood. He was joined by his A Star is Born costars at the event, Bradley Cooper and Lady Gaga.

While millions have seen Elliott’s work, he is still a household name for those who have never watched anything he’s starred in. The talented actor is recognized around the world, not just for his signature bushy mustache, but for his deep, twangy voice.

In fact, Elliott’s voice may be just as famous as the man himself. People find themselves enchanted by everything he says, maintaining that he could read the phone book and make it sound epic.

Within more recent times, people have put Elliott’s voice to use for the sake of comedy. Talk show host Stephen Colbert had him doing a dramatic reading of Lady Gaga’s song lryics, while another interviewer a few years back asked him to read the lyrics to Taylor Swift‘s “Bad Blood.”

The results of both videos were equal parts hilarious and impressive. He really can make anything sound good!

But years before Elliott’s husky voice was reading “‘Cause, baby, now we’ve got bad blood,” his voice had already been tacked on to another one of Swift’s songs…only not by Elliott himself.

Chris Slonske is a YouTuber and voice actor who has developed a polished impression of Elliott since he picked up the voice over seven years ago. His first video showcasing the impression was a short, 30-second clip narrating a snowstorm outside of his house.

The next time Slonske shared his Elliott impression on YouTube was three years later, which was when he shared a dramatic reading of Swift’s “Shake It Off.”

Instead of showing himself, Slonske left up a photo of Elliott as he spoke, enhancing the feeling that it was really the Tombstone star speaking.

If you didn’t already know that clip wasn’t recorded by Elliott, you could easily listen to it and be fooled!

After that, we bet you want to know what Slonske looks like. Well you’re in luck, because he eventually shared a video of himself doing Elliott’s voice while keeping the camera on himself.

It’s wild to watch someone who looks nothing like Elliott and hear that oh-so-recognizable voice come out of his mouth.

If you thought that was good, we haven’t even shared one of Slonske’s best videos yet!

Reading Off A Famous TV Theme As Sam

This video once again has him revisiting Elliott’s voice for a dramatic reading. Instead of choosing a pop artist’s song, Slonske opted to recite one of the most well-known TV themes of all time…the theme to The Fresh Prince of Bel-Air.

Words can’t even begin to describe how mind-blowing Slonske’s impression sounds in this clip. It shows that he nailed Elliott’s voice perfectly, and can use it to create something too cool for words.

You can check out this outstanding sound-alike’s impressive performance in the clip below. He sounds so much like Elliott, it’s uncanny!