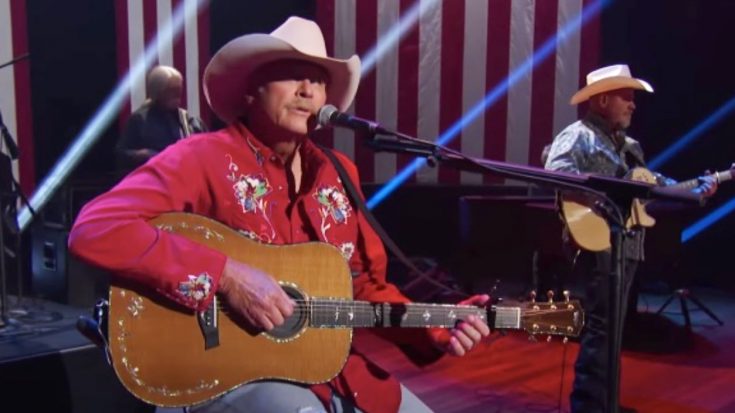 Each year, PBS celebrates the 4th of July during a televised concert special called A Capitol Fourth. The 2021 lineup of performers included several country singers, such as Mickey Guyton, Jimmie Allen, Jennifer Nettles, and Alan Jackson.

Jackson performed his hit single, “Drive” during the special. Released in 2002, Jackson wrote “Drive” as a tribute to his late father, Eugene Jackson.

The song is one that has been covered by many country singers in the past, including Garth Brooks, Daryle Singletary, and Martina McBride.

Perhaps most memorably, the song was performed by Willie Nelson and an ensemble of stars during the America: A Tribute to Heroes telethon in 2001.

Jackson’s performance of “America the Beautiful” during the 2021 Capitol Fourth special is now one of our favorite renditions of the song. He delivered a passionate performance of the patriotic classic.

If you missed the Capitol Fourth special when it aired on TV, don’t fret. Jackson’s entire performance of “America the Beautiful” was uploaded on YouTube, and you can watch it in the video below.

This song always stirs up some emotions, so you may want to keep a tissue or two close by. Don’t be surprised if you have tears in your eyes by the end of Jackson’s performance.

And don’t forget to watch him sing “Drive” in the video above if you skipped over it before!