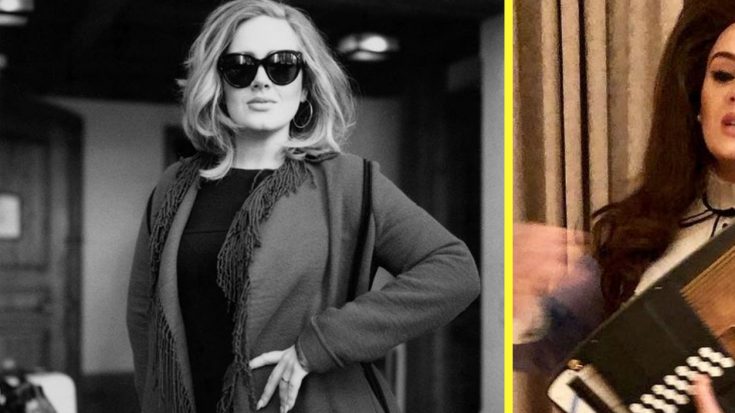 She’s in love with country music and the many legends associated with it – so she’s taking her fandom to the next level!

Adele has already been known for singing a hit song written by Chris Stapleton and performed by The Steel Drivers and even has taken to the stage with Darius Rucker for a tribute to Lady Antebellum, but it seems that she’s starting an annual tradition of dressing up as one of her favorite country legends…and this year she chose June Carter Cash!

Just a year ago, the queen of soul-pop music and beloved British hitmaker took to Instagram to share her own take on Dolly Parton’s fabulous look – complete with the highest blond wig you could imagine!

“The effortless queen of song, Dolly Parton! We love you! We wish We could possess an ounce of your ability,” she wrote in the caption. “You were the hero of our night! A hero of my life. I’ll always love you x.”

Adele stood on some beautiful hardwood flooring in front of what appears to be a heavy set of curtains and donned a busty white blouse, rhinestone-laden salmon colored pantsuit, and fake nails so long they could poke an eye out!

The effortless queen of song, Dolly Parton! We love you! We wish We could possess an ounce of your ability. You were the hero of our night! A hero of my life. I'll always love you x

For her sophomore album in 2011, Adele recorded her own version of The SteelDrivers’ song “If It Hadn’t Been For Love,” and it was featured as the B-side of her hit single “Rolling In The Deep.”

Beyond just recording country music on her own records, Adele cites musical influences like Garth Brooks, Wanda Jackson, Alison Krauss, Lady Antebellum, Dolly Parton, and others. This stemmed from her 2008 tour through the southern part of the U.S. and she gained a stronger appreciation of country, southern rock, and bluegrass music after taking frequent smoke breaks with her tour bus driver.

The end result was a marked influence on her second album, 21.

Now, it appears that January is Adele’s month to dress up as a famous country music legend! In 2018, she did Dolly Parton, but this year she’s channeling June Carter Cash with an outfit that’s straight out of the 60s.

Fitted with an autoharp (Carter’s instrument of choice), a billowing gown, and a brunette wig, Adele looks the part more than anything we’ve seen in recent years and we’re sure that her own take on “Ring of Fire” would be remarkable!

Check out the full photo below and let us know what you think in the comments! Perhaps this means Adele has some country-flavored music in the works?